Remember ELVIS? Not only has ELVIS left the building. ELVIS has left the property. Since Friday evening, ELVIS has a new home a mile down the road in a communty arts garden where I am sure it will be put to good use. Maybe they can paint a picture of it on some black velvet ....
Posted by Gary at 11:51 PM 2 comments:

Today We Reached a New Milestone 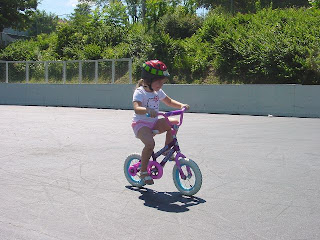 This increases the number of distractions that will affect my working on the house in any timely manner ....
Posted by Gary at 11:46 PM 4 comments:

On Friday and Saturday I had the fun job of hauling 500 bricks from the brick yard to the "Crack House" and getting them into the dining room. On top of that, I have already hauled about 100 of them to the third floor. Since the demise of the old van, this took three trips in the Saturn, 175 or more bricks at a time, 11 trips with a wheelbarrow from the car to the back door and 80 trips from the back door to the dining room. Since nobody raised their hands to volunteer to help me, my newest best friend is a set of brick tongs! A pallet of bricks doesn't look too overwhelming until you haul them 7 at a time with some brick tongs and realize that in order to add 6 feet of height to a chimney, you have to make 54 trips up and again down three flights of stairs and then another 54 trips up a ladder to the roof. On Friday it was 80 degrees on the first floor and 90 something on the third floor. Fourteen trips up and down the stairs was enough for me. I must not complain though. My work on this place is petty when compared to what I saw today.

We took a road trip to Loveland, Ohio to visit "Castle Laroche" which is one of those urban legend things that read about once in a while. Deborah visited the place sometime in the late 1970s and met the man behind the legend. If you visit the web page you can read about this guy. Anyway, he started a project in 1929 that blossomed into this It is made of 56,000 five-gallon buckets of river rock that he carried from the bank of the river below the property and thousands of concrete bricks that he made using cardboard quart milk cartons as molds. He really started to work on it full time in 1955, after he retired, and continued until his death by which time it was 98% complete. The whole thing cost him $12,000. What is so ironic is that he died in 1981 at the age of 91 from injuries related to a trash fire that he started.
So my 7 years working on the "Crack House" has nothing on this guy and unless I inherit a quarry or something similar I guess it never will!
Posted by Gary at 12:20 AM 7 comments: