Here are two pictures of the upstairs bathroom. This room used to be a closet and sometime around 1940, when Helen's uncle became ill, they converted it into a bathroom and added the window. I think it may have been painted these colors and the vinyl floor installed around 1971 since that is the date stamped inside the wall mounted toilet tank. 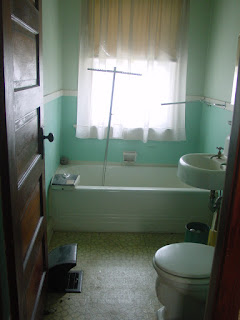 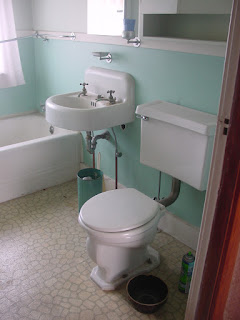 There is no shower in this room and as you know from the previous post, the plumbing had to be replaced. Here is a picture taken around the time the service line was being replaced. I was worried that my solder joints wouldn't hold in the shower when the water was turned back on with full pressure but they did! 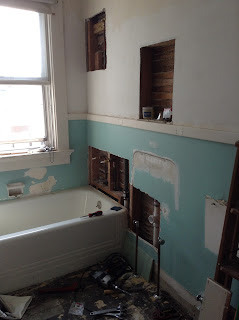 Rather than tile the walls I installed aluminum ceiling tiles around the tub area, carefully caulking all the joints 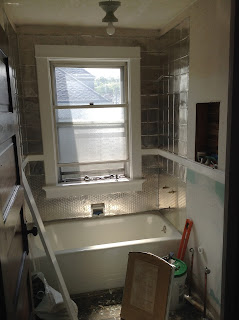 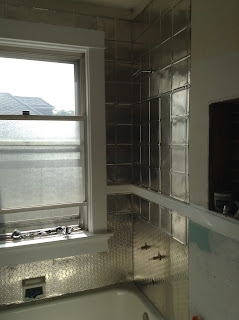 Then I painted the surround with a high gloss paint and put molding around the edges. 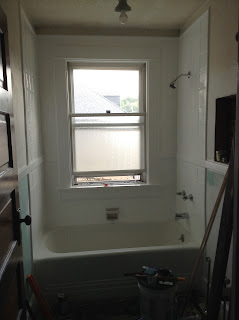 The walls were painted two shades of blue. The sink was refinished with porcelain paint. Linoleum tiles were installed on the floor. All that is needed is a shower rail and curtains. Here is the new look! 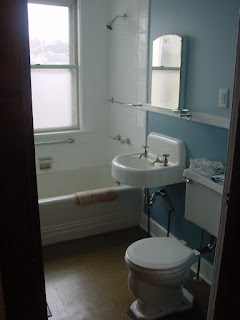 While all of this was going on I was working on the downstairs bathroom as well. I did the same with the aluminum ceiling tiles. The downstairs bathroom had a shower installed though Helen told me it was never used. I have no before picture but the walls around the tub were wallpapered like the rest of the room .... 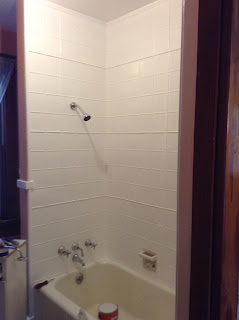 I took this photo this week from the stairway.I need a new toilet. The porcelain insert into that cast iron opening snapped off when removed the old one. Everything was sealed with some sort of putty instead of a wax ring. 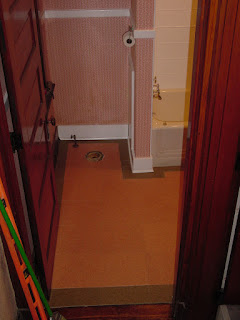 I refinished this sink in this room as well. This door wouldn't shut properly either. I had to lower the strike plate on the frame about 1/4 inch. 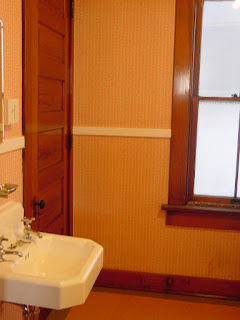 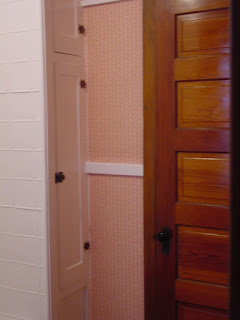 What else have I been doing? Stripping wallpaper. That can be the next post. Stay tuned.
Posted by Gary at 1:00 AM 4 comments:

If you have been following this blog for the last 10 years then you will know just how much I hate plumbing. Well, we had some plumbing problems with Helen's House. If you used the upstairs sink the bathtub would fill with water and then slowly leak through the ceiling in the parlor below. Drainage was slow and there was no water pressure throughout the house. The upstairs bathroom was installed in 1940. Unfortunately for me they used iron black pipe for some of the drainage lines and the joint fittings instead of galvanized pipe. So I had to get on a ladder and remove some ceiling tiles to expose these pre-existing holes. 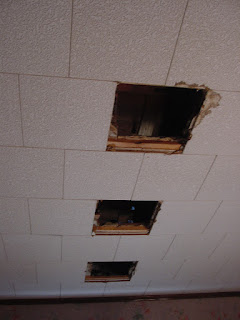 I looked at these holes for several weeks before finally compelling myself to shut off the water and tackle the problem. I also started updating the upstairs bathroom at the same time. I had to borrow a pipe cutter because when I tried to remove sections of pipe with a pipe wrench they just shattered and here is a picture showing why the tub filled with water when draining the sink and also why the draining was extremely slow. The 3" and 4" iron pipes were in decent condition but anything less was all like this. 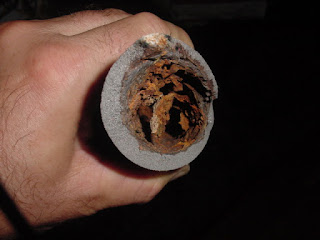 I made certain to get all this done and the shower installed upstairs before having the water line replaced by a real genuine plumbing contractor. There are some jobs I can not do myself. (There, I said it!)
The water meter had to be moved to the front yard per City regulations and I even got a section of the drain replaced with PVC and an outside cleanout! 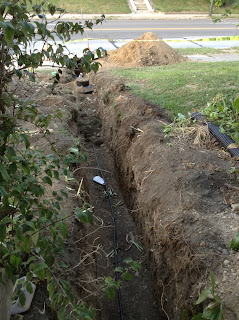 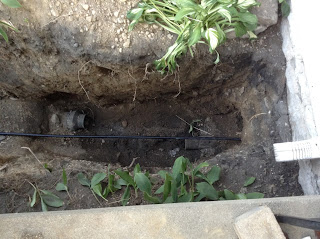 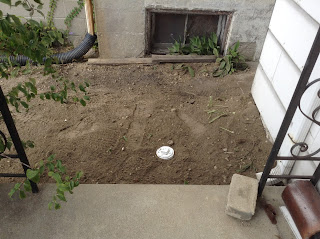 All this was going on in August and September so this isn't a new story but the good news is that now it is done I had to cover up those holes in the ceiling. Here is what the chandelier looked like before plumbing fix. 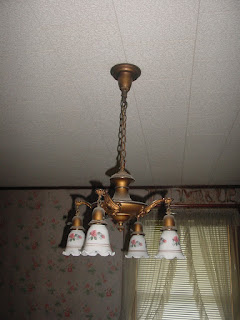 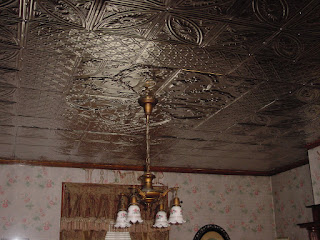 So now I can add installing a tin ceiling by hand (using a hammer and cone head nails) to my list of accomplishments .......
Posted by Gary at 9:29 AM 2 comments: