I posted years ago about Charles Edgar's patents. He invented an automatic gate, an improved hay rake and a carburetor that I haven't figured what purpose it had. When he died in 1876 the carburetor patent was the only one that was purchased by a businessman. Any way, it turns out that Charles Edgar's father had a patent issued back in 1869 for this. 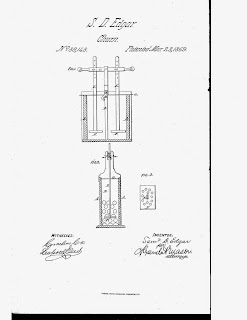 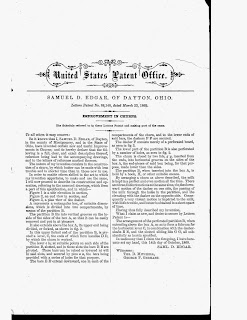 I think I need to make one and display it in the house.
Posted by Gary at 2:08 AM 1 comment:


Way back in 2001, one of the first things I had to do was replace the shingle on the roof to the kitchen. At some point in the past a tree limb had fallen on it and for a while it must have leaked as was evident by the damage done by either carpenter ants or termites  in the boards that separated the two rooms that now make up our one long kitchen. Water used to poor down the wall when it rained.
It was the first time that I had done roofing so I shingled the dip in the center of the roof near the lowest edge above the large window. After a few years, water would pool in this dip, seep under the shingle, come through the wall and drip onto the window sill. So for several years, I'll call them the "Mayor Years", there has been an array of jars and bowls on the window sill to collect the water. The furniture in front of the window had to be pulled away because the splashing water was landing on it. Here is a picture taken this week in fact. 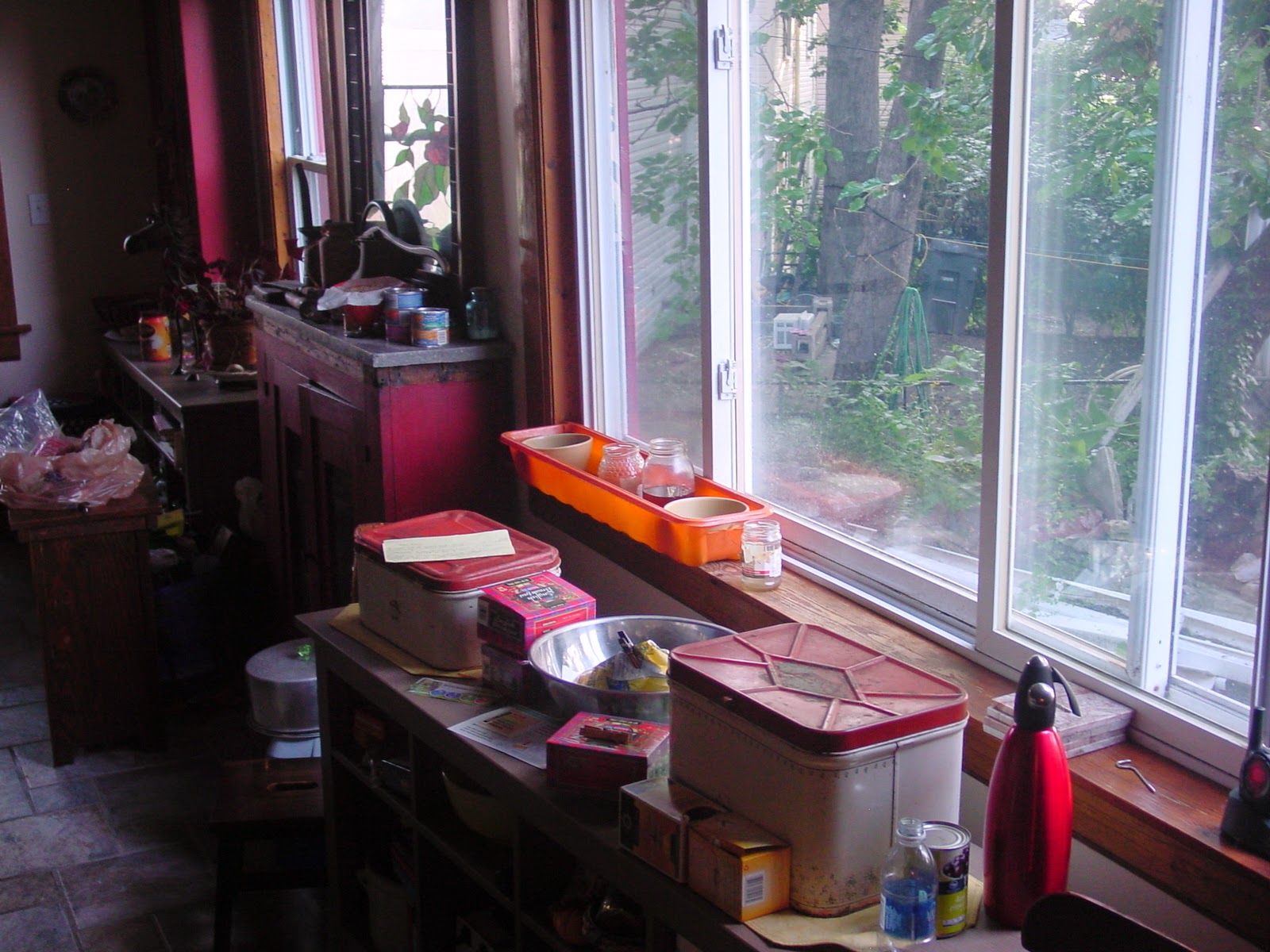 One of the cats has knocked the wallpaper trough off several times causing bowls and jars to break.

The wife grew tired of it and demanded that I replace the roof. Well, replacing the roof is no easy task and the rest of the roof is just fine. It is a single layer of shingle on sheathing. I told her that I would put a metal roof over the shingle. I just had to figure out how to handle the sag and the flashing around the windows. On June 25th I ordered the materials needed at menards.com and on the 16th July I picked it up to start work the next day because it wasn't going to rain for several days. The first day was spent shimming the roof with some 2X6 and 2X 4 boards and placing supports under the boards where the dip in the roof is. Here is how it looked at the end of day 1. 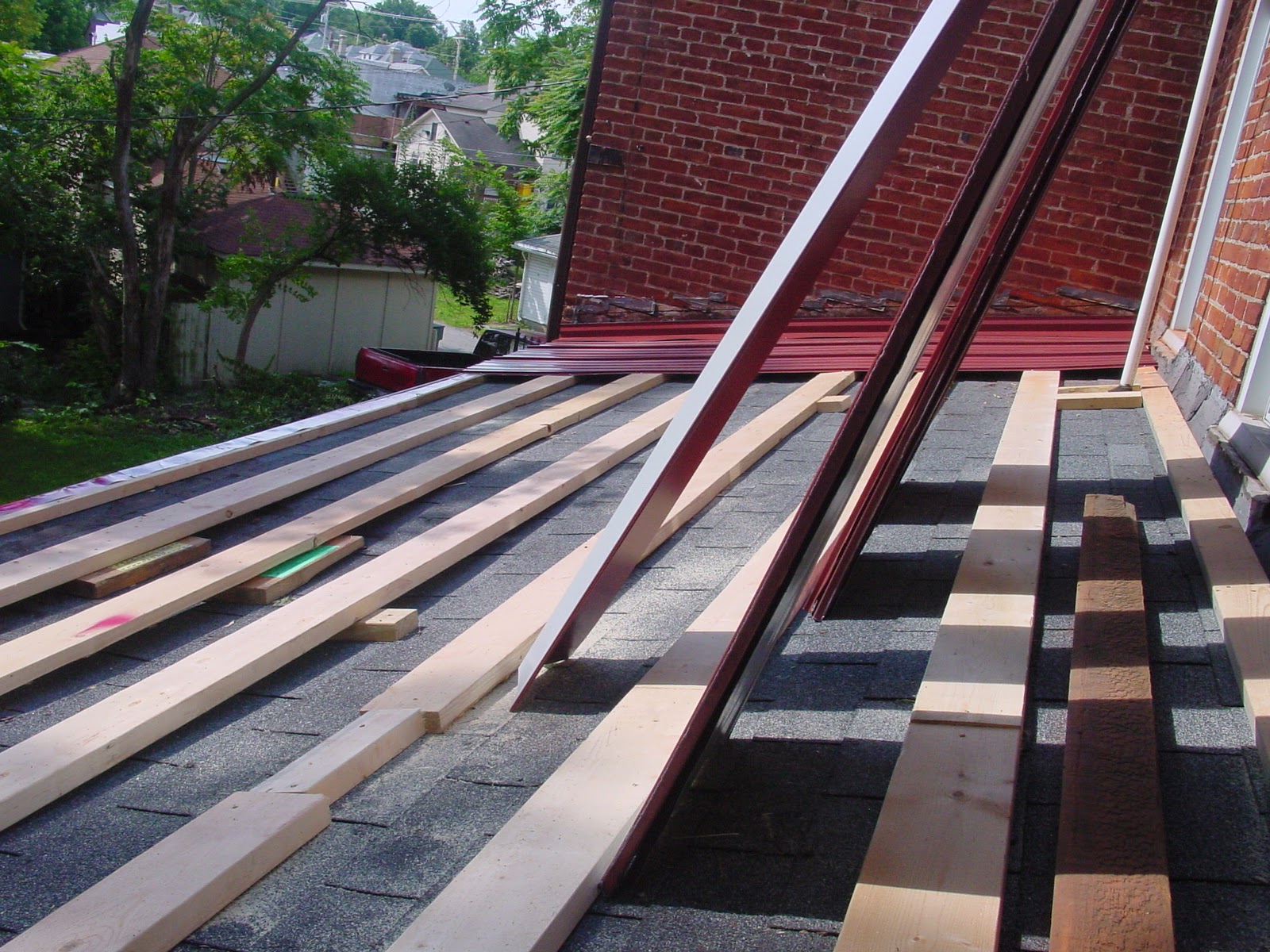 Here you can see the situation with the dip in the roof. 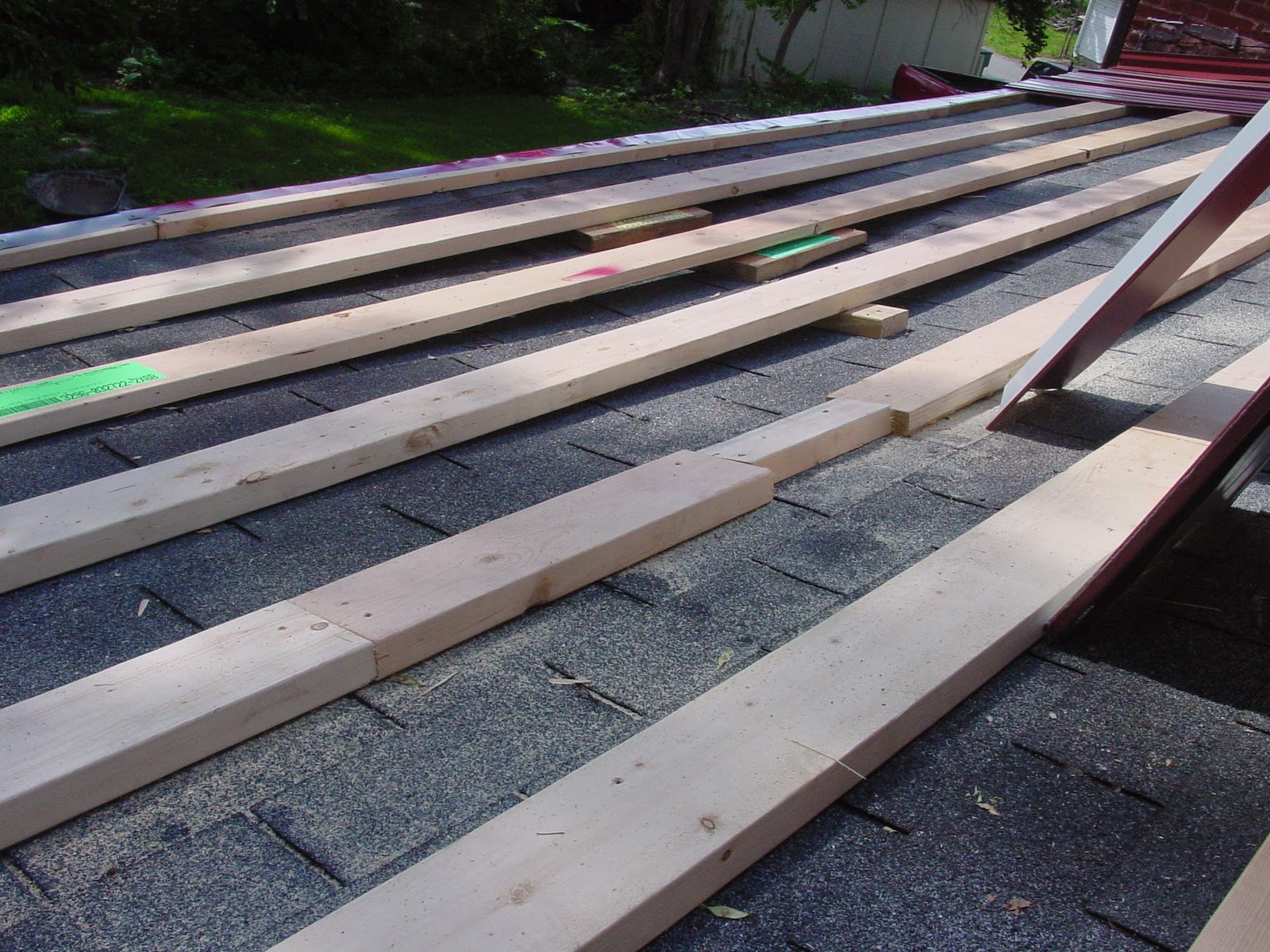 The next day I figured out how to cut and install the flashing around the window sitting down without sliding off the roof and got another several panels installed. Then it began to rain. I put another panel in place and it started to rain harder. I came in out of the rain to check weather online. Rain would last an hour. Two hours later it is still raining so I went to the grocery store to buy beer. Seemed like a good use of my time. Got home, still raining. Water pouring down from the upper roof where the downspout used to be before I removed it to work on the roof was causing pooling in the dip and water was filling the array of jars and bowls on the window sill just as they had done during the "Mayor Years." Wife would be home soon. This wasn't going to look good ..... Got on roof in pouring rain to put one more panel in place so that I could wedge in the downspout, lean it to the left and have water run down the metal into the gutter instead of into the dip and into the house! Now I was a little concerned because only half the roof was done and I had used a lot of screws to put the wood boards in place and was having visions of water damage to the part of my ceiling that was not covered by metal. After 4 hours the rain stopped. It was 9:30 PM and dark outside. It was raining the next morning, too.

On day three I put down two more panels and cut two inches off my downspout to put in place but now I had to wait for the roof to dry out before finishing. I was smart enough to creat air flow channels at the edge of the roof and perforate the edge flashing but with the amount of moisture from the rain, I was better off waiting for nature to dry out my roof. It seems to have stopped leaking though. Here was the extent of the work by day 3. 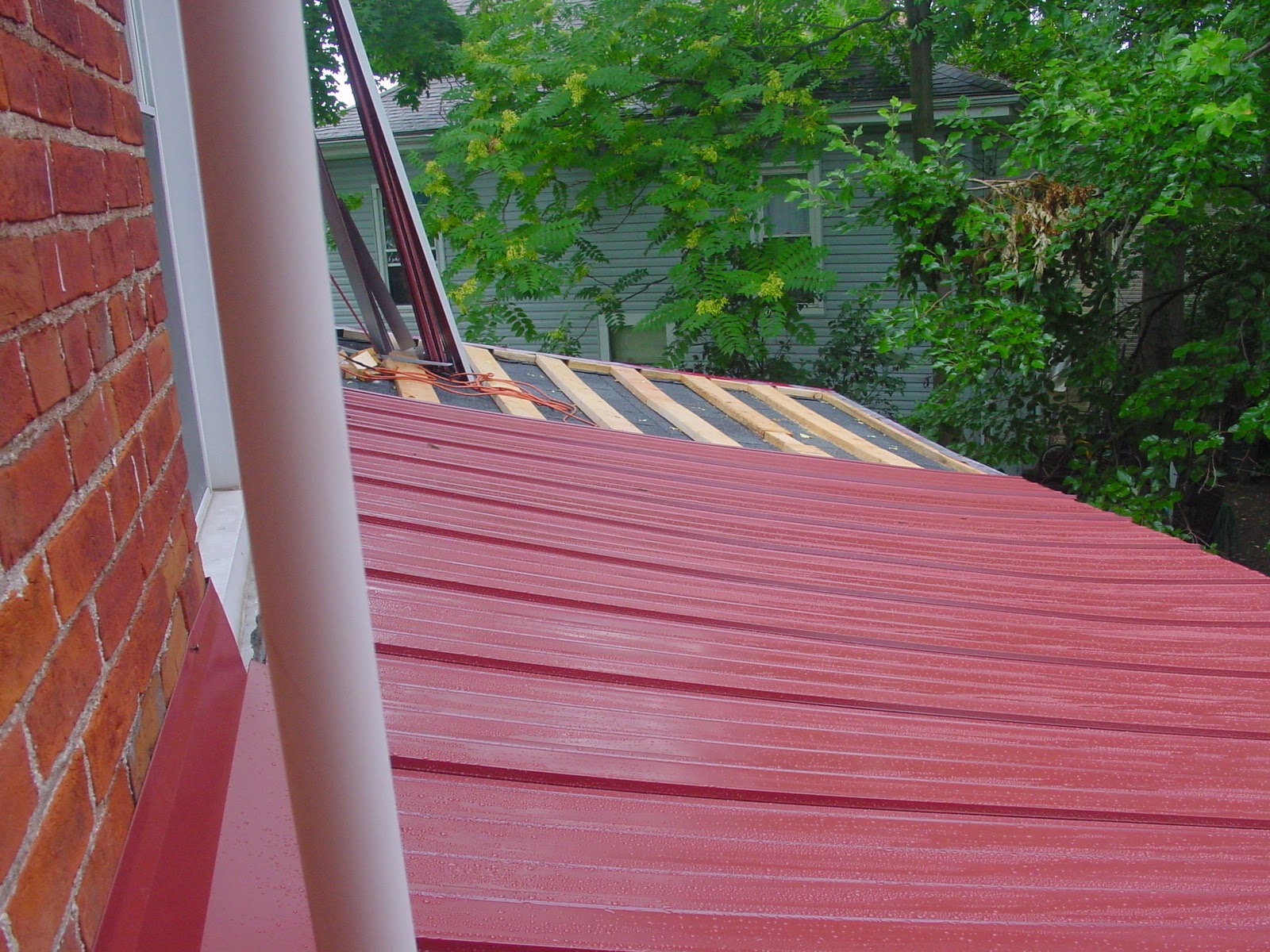 Once I figured out how to deal with the flashing around the windows things moved a little faster. Especially when I realized that sitting on a rubber backed mat would stop me from sliding down the roof! 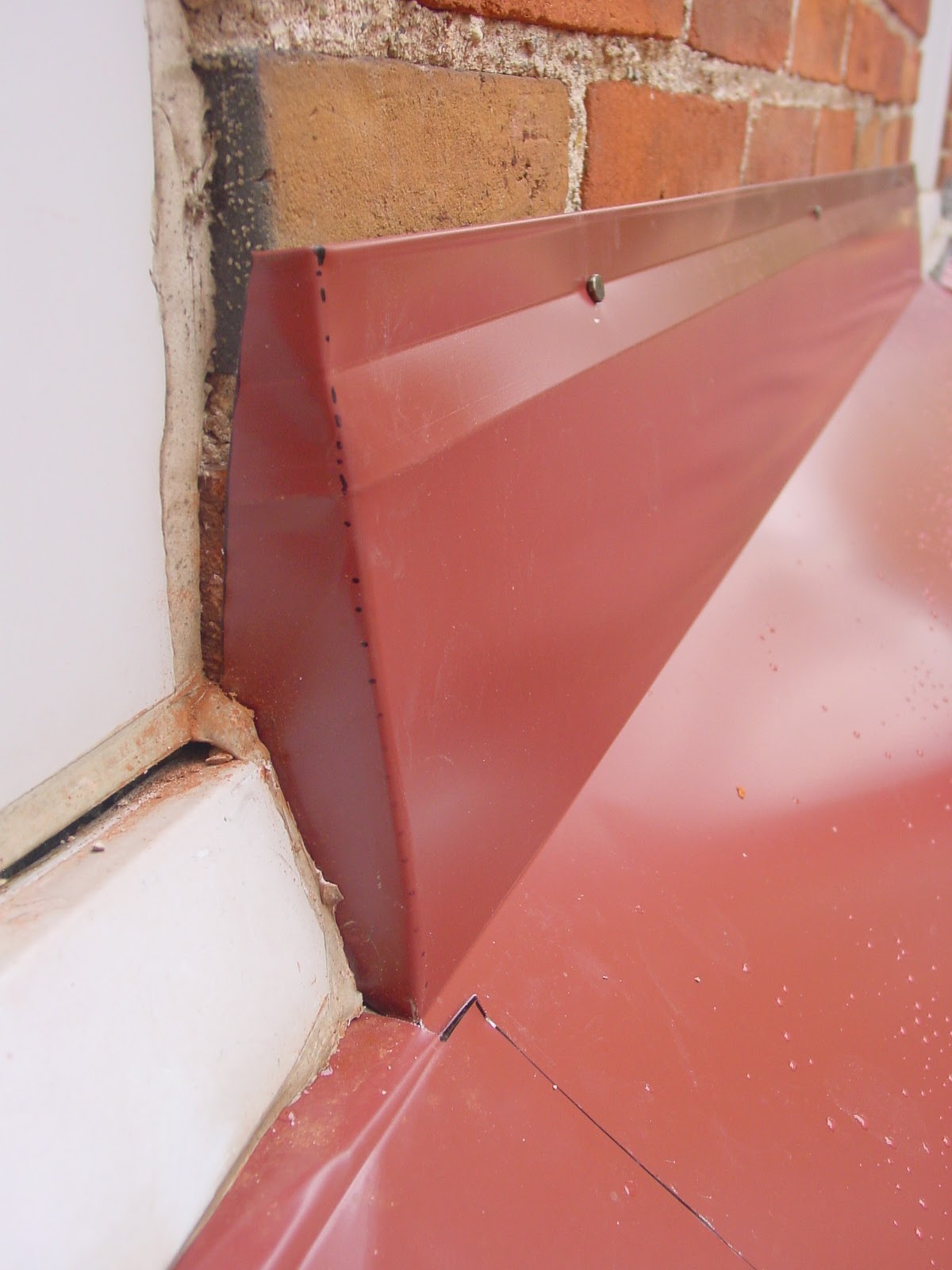 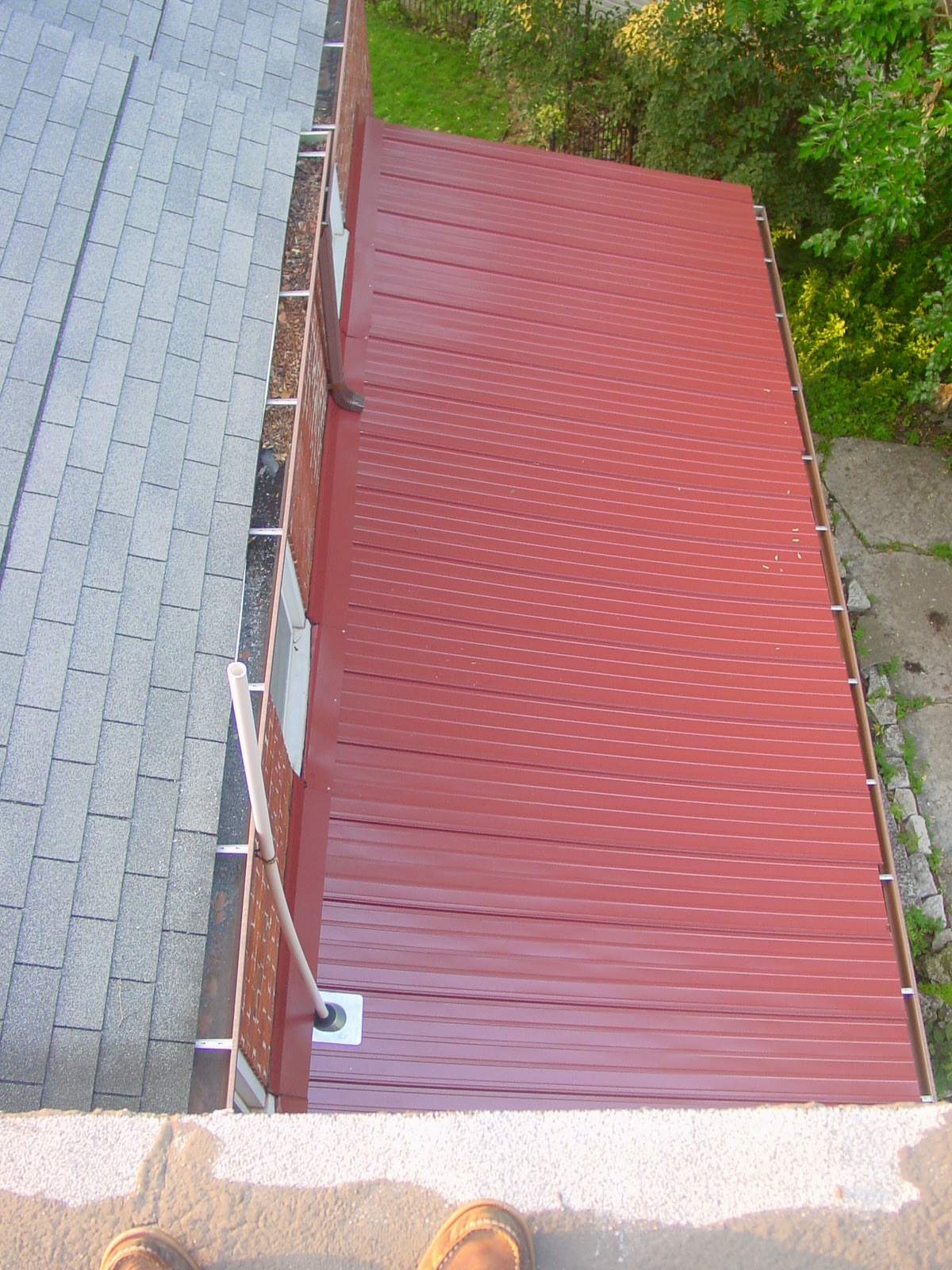 Unfortunately the only place you can actually see the roof is from up there! 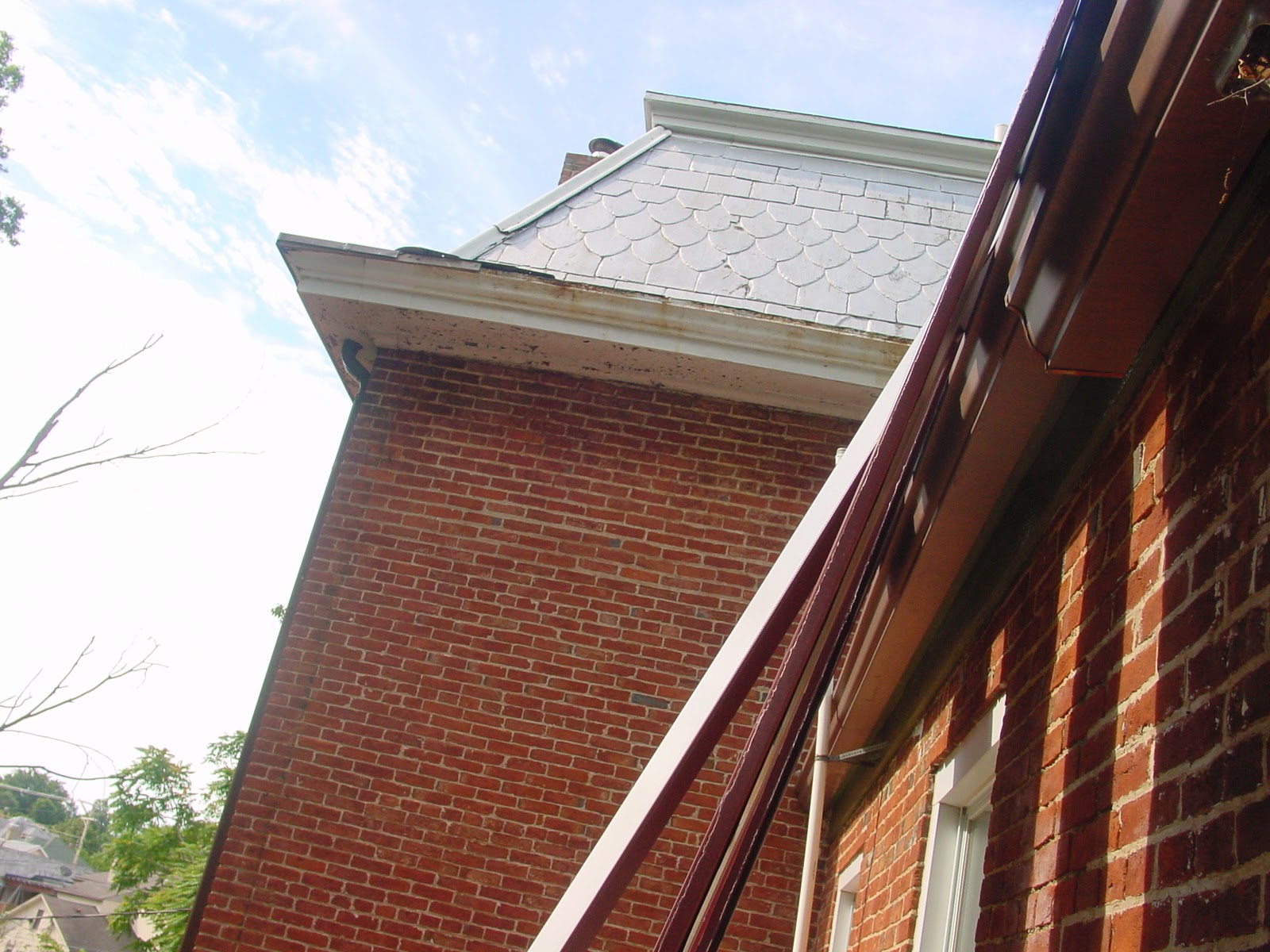