I know, I know, why has it taken so long to post this? I've been busy and have actually been getting some work done on the Old Crack House itself!

When I last wrote, I mentioned more issues with plumbing. I couldn't figure out why the "speedfit" adapters were leaking where they were attached to the original copper pipe. When I turned on the hot water supply, the shut off valve was also leaking at the joint where it was attached to the old copper pipe. My mother made a comment that prompted me to have one of those moments when you realize what the problem is but you don't know right away how to fix it. She said rather calmly, "You don't suppose it's imperial pipe?"

In England, household supply lines are generally 15mm or 22mm pipe. Imperial measurements would be exactly as we use in the U.S. either half inch or 3/4 inch. Luckily 1/2 inch equals 15mm but 22mm is about 1mm larger than 3/4 inch thus explaining the cause of the leaks. They make a fitting for this but I was running out of time, patience and the part that I needed would have to come from a plumbing supply store and those close early in the UK. I wasn't planning on replacing the old copper hot water supply line but now it would actually be easier and faster to do so. Since I couldn't readily acquire an imperial to metric fitting so I bought some 3/4 inch brass olives for a compression fitting and used one at the shut off that I had installed, removing all the copper after that point and replacing it with the plastic pipe and "speedfit" fittings. This worked! Once the plumbing was functioning properly I was able to finish grouting tile and installing fixtures knowing that any additional leaks would be from the fixtures. My older brother who lives an hour away could fix those if he could get his hands on an adjustable wrench. So, with the plumbing done, what else could go wrong? Easy, the new drain fittings were metric and the old pvc waste lines were imperial which meant that I had to replace the drain traps and some pvc pipe. Fortunately these pipes just had to go through the wall to feed an outside drain. The sink trap had to have an adjustable neck though because the new sink drain pipe would not line up with the old one .... Then there was the tile that I broke installing some baseboard molding and the fact that I couldn't install the towel rail because there was problem with one of the parts .... need I go on?

The comedy of errors ended with the bathroom looking like this. 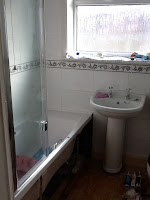 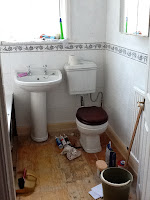 I estimated that I saved my mother $2000. In the process she learned a little bit about plumbing and how the time taken to do anything related to plumbing is inversely proportional to the complexity of the job! I still hate plumbing!
Posted by Gary at 3:35 PM 8 comments: