Life on the Edge!

I have been doing some garden work lately. Albeit rather slowly since I no longer have a life outside of work!
I went and bought some metal edging. Couldn't buy it in Dayton. I had to drive to Lowes in Springfield, Ohio. None of our local big box retailers carried the stuff. Any way, I have been at this project for at least three weeks. If it would stop raining on the weekend I might finish it.
Here are some pictures of the progress. 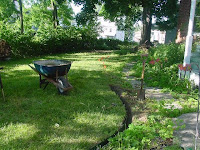 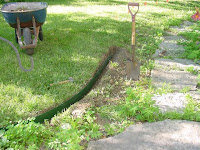 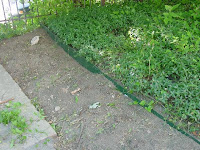 The cool thing is that we figured out what to do with all those surplus sign stakes now that the campaign is over.

I didn't have to buy any tomato stakes this year! 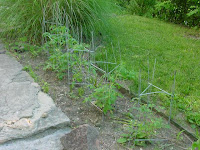 The saga of the kittens is both happy and sad. The sad news is that the mother had 6 kittens and only two are left. The mother cat was too young and inexperienced we figure. This was probably her first litter. She divided the litter after we found her in the attic.
At one point all but one kitten had been removed from the attic. We found two on the ground in the fire escape at the back of the house. Both were in poor condition and covered with flies. We managed to save them though and energize them with this 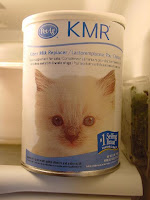 Who would have thought you could by formula for kittens? We removed the one from the attic and had this trio for a day. 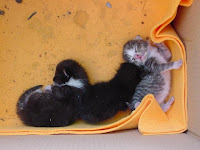 Deborah and Elizabeth took it upon themselves to be feeders of kittens. At one point hey had the little black and white one on the grass in the yard and the mother cat came up and swiped it away.

We don't know what happened to the first three kittens of the litter but we found the decapitated body of one of them under a bush about ten feet from the opening of the fire escape. A day later we found the decapitated body the black and white one in the same spot but the former body had disappeared.
We can only assume that the mother or one of the father cats had killed the litter off. I don't understand the ways of cats and don't plan on studying them at this point.
There was much wailing and gnashing of teeth but Elizabeth got over it. She got her first dose of how cruel life can be.

The two remaining kittens were fed every morning and evening and any time in between if we were able to. They really needed attention every 2 hours but that was impossible. They weren't going to die though. After about a week our mail delivery person rang the doorbell and told us that her neighbor fosters cats for SICSA (Society for the Improvement of Conditions of Stray Animals). After a phone call we were also informed that the neighbor was currently fostering a nursing mother with four kittens. Within a day or so after that our two abandoned kittens were placed in a home where they could learn to be cats. I would like to thank the federal government (via the USPS) for their support in relocating these two orphans. When and if we ever catch the mother we are going to get her fixed and release her. Maybe I should issue a Mayor's Proclamation. I certainly need to cover that hole in the roof of the fire escape before I have a case of Deja vu!
Posted by Gary at 4:34 PM 3 comments: