Today was trash collection day. However there is more to today's City customer service story. I went out to my truck that was parked across the street from my house to get a sheet that I had left on the back seat. I last drove the truck on Monday evening and was parked on the street instead of behind my house because I had got stuck in snow in my alley on Sunday morning as we were leaving to go to an auction. Since there are still copious amounts of snow around my house I parked on the public street figuring that in a few days I would move the truck back to it's regular spot. I found this stuck in the driver side door. It was left this morning. 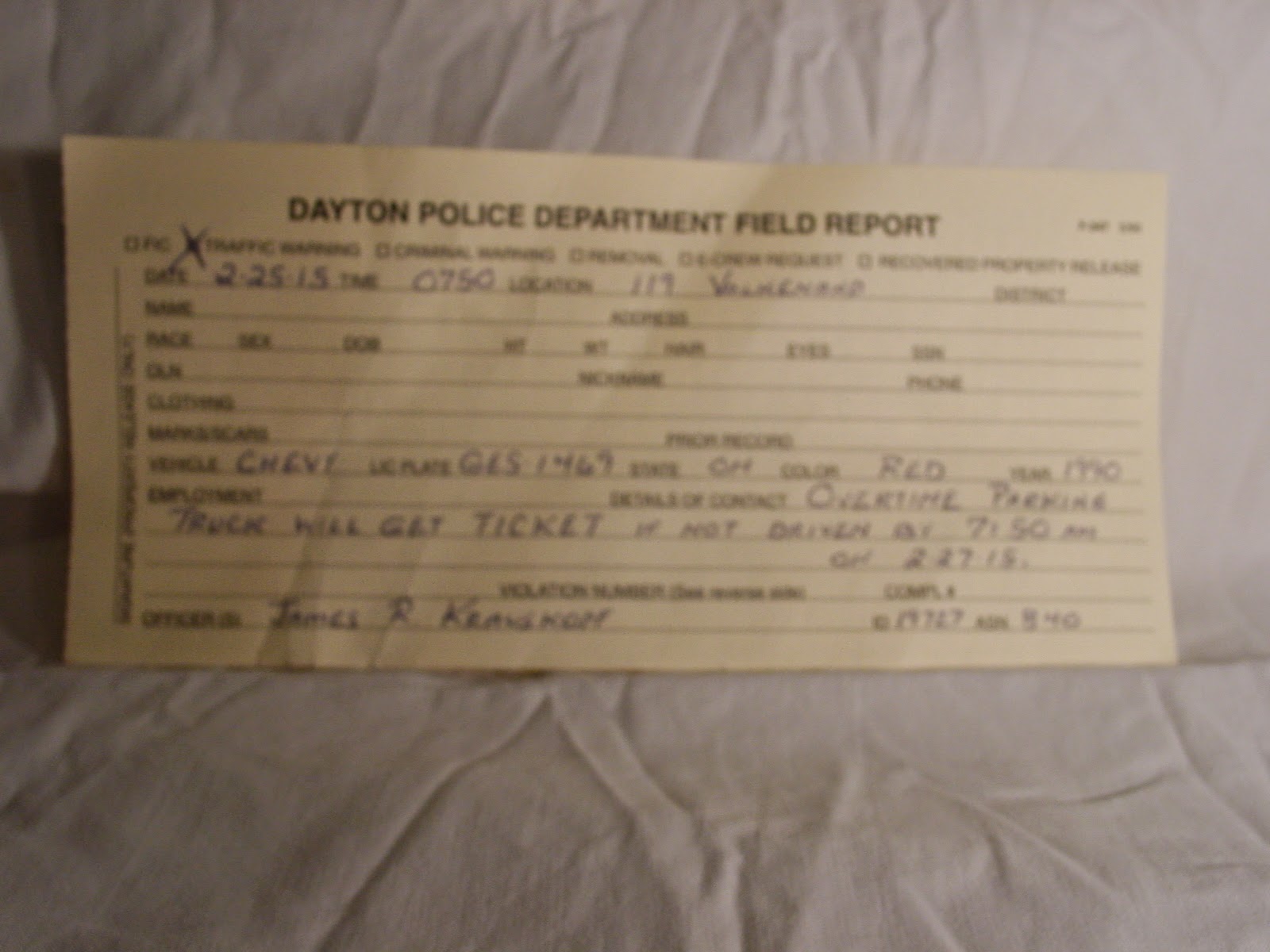 My truck, which has no snow on it and has been parked in one spot for 36 hours gets a warning for "Overtime Parking" which is an offense I have never heard of before. The officer would have run my plates and known who the vehicle was registered to and could easily determine that it was parked across the street from owner's property. Someone must have complained.

Now what is so amusing about this to me is that my car has been parked in front of my house all covered in snow and has not been moved in over a week but there was no warning posted on it. So, I was out scraping the snow off the car this afternoon so that I could drive it when the garbage truck came up the alley. I stopped what I was doing. Ran to the house. Grabbed the iPad and set it on video so that I could record whether or not they would take the trash that has been sitting for four weeks now. I got so excited when the guy got off the truck and pulled my can to the lifter. Then this happened.


My guess is that the rug had froze to the bin and so they took the whole thing. Something that would not have happened if the bin was emptied during any of the three previous pick up dates. Now if I remember correctly, in order to get a new garbage can from the city, I need to report this bin stolen and file a police report. Isn't it ironic?
Posted by Gary at 10:00 PM 3 comments:

Let's see how long it takes the City of Dayton's waste collection department to empty my garbage can. Here is the scenario. Over three weeks ago, on February 4th to be exact, I put out the garbage can for the property that we bought across the alley from us. I took an area rug that was falling apart, folded it and secured it with duct tape and dragged it out to the alley and placed it on the top of the can because the can was already half full. When the garbage truck arrived in the afternoon I watched from my window as the guy emptying the bins pushed the rug onto the ground, empty the bin and left the rug laying in the alley.
I went out immediately, picked the rug up and placed it in my bin. Here is the picture that I took from my window. 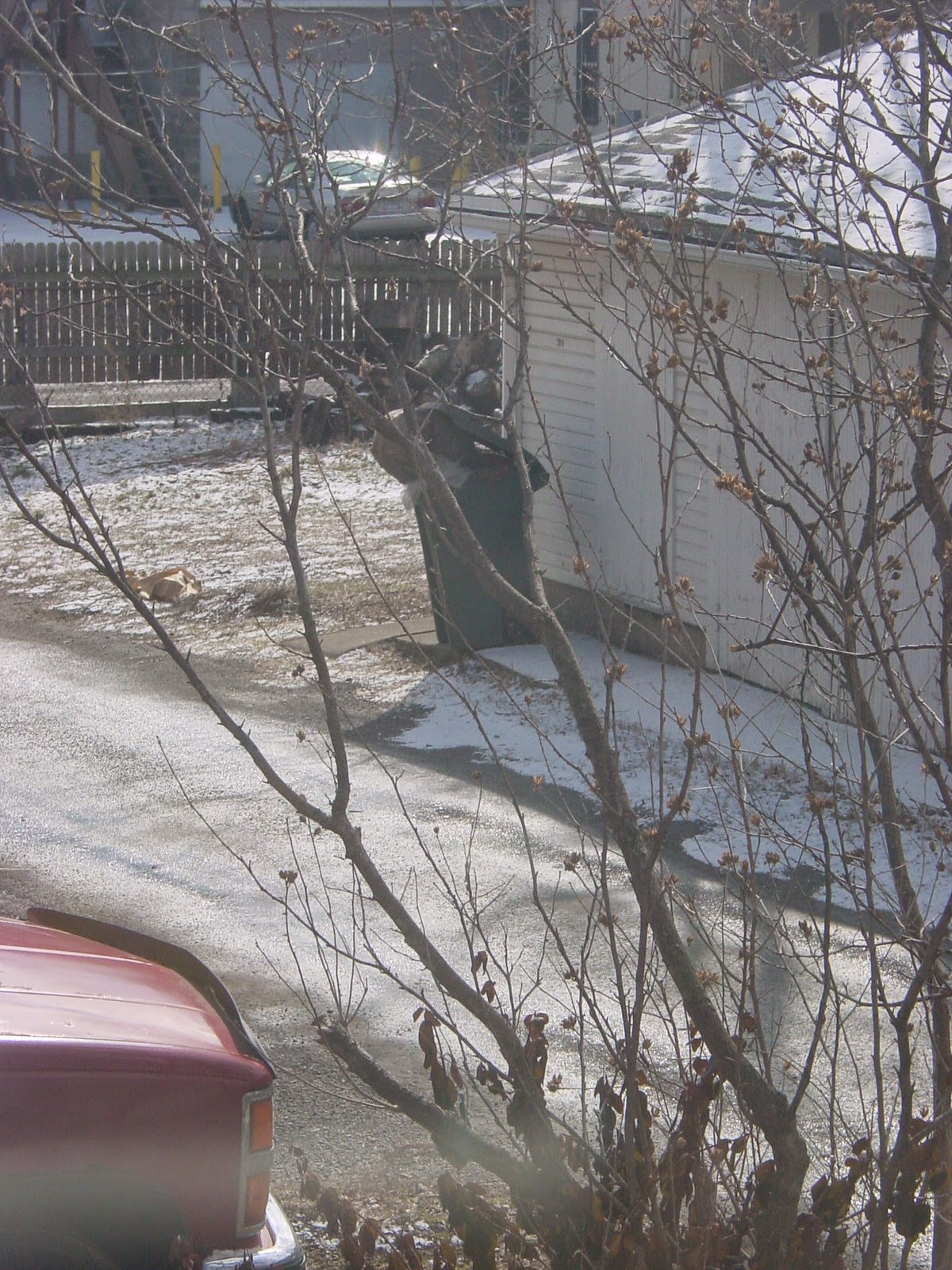 Here is a picture that I took after witnessing the collection crew drive by it the following week.I added a few sheer curtains to the bin. I have several garbage bags of stuff sitting in the house that I need to put in the bin but as you can see there is no room and the City workers won't empty it. 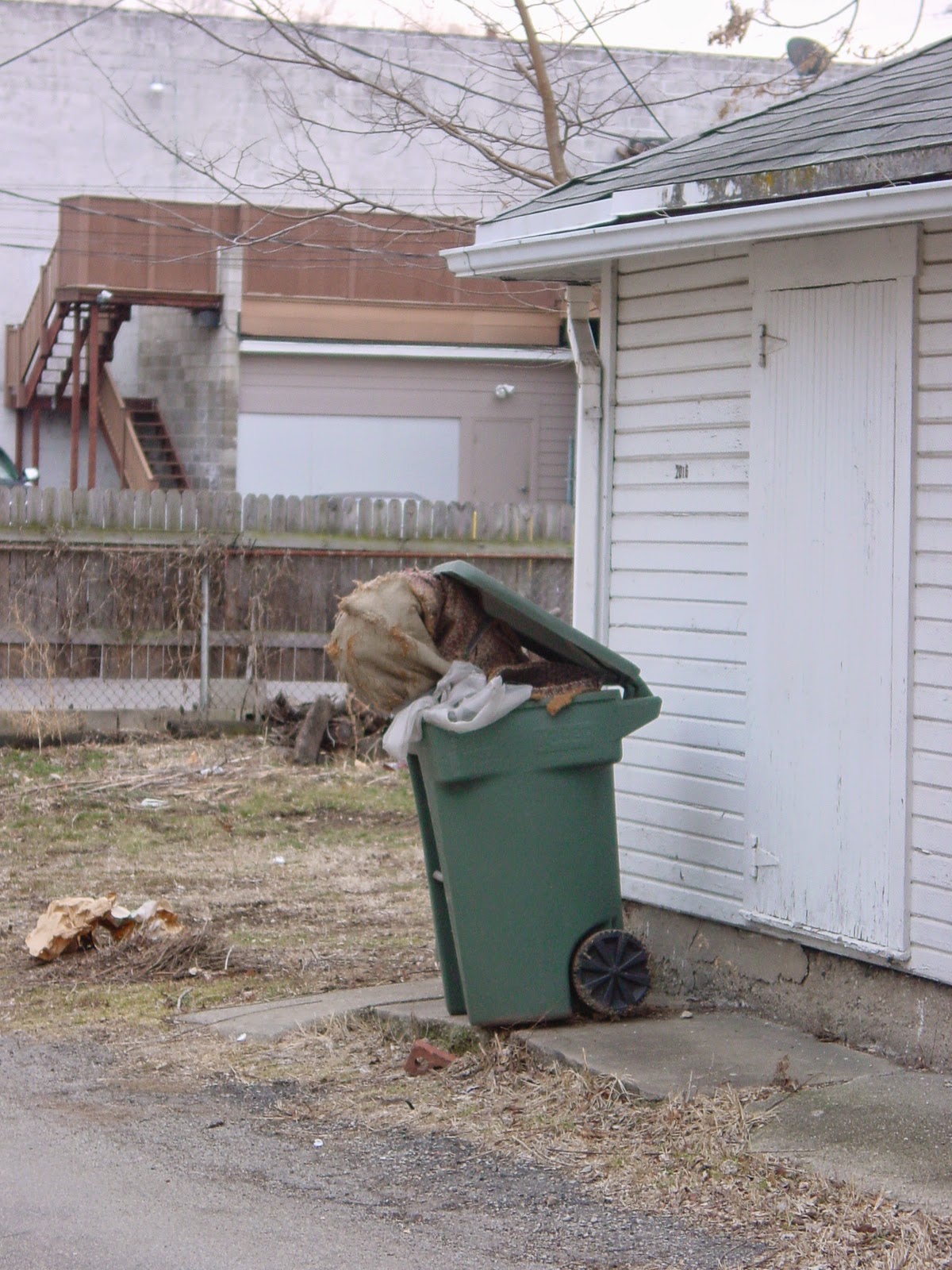 Now, for those reading this who don't know, I was Mayor of this city for 4 years and one of my pet peeves before getting elected was the way that waste collection did a shoddy job for their customers. We made some vast improvements on many fronts in those 4 years. However, it seems that since the new administration (which is really the same four council members who were there before I was elected plus one of their old school board friends) is doing exactly what they did before 2010. That is ignoring the citizens. So this past year they gave themselves a pay raise, made a renewable part of the city income tax permanent by misleading the voters and have imposed a street light assessment on most city properties based on the previous year property value. (Yes, property values declined this year but the assessment is on the higher rate. We have to pay an assessment on a vacant lot as if the house was still on it ....) All these fees and taxes mean job security for the city employees so they are back to treating the customers who pay those taxes badly. It is nice to know that the former mayor is treated the same as every other citizen. I wouldn't want special treatment, I just want the garbage can that I pay for every three months and use about once every six weeks emptied when I place it in the alley as I am expected to do. If you don't believe they are ignoring this can then watch what they did this week on the 18th.

While the trash collectors were ignoring my garbage can, the current mayor made headlines on February 11th in her state of the City speech about a customer service initiative to improve relations with the citizens. Something we never had to do during my four years, since I was described as the most accessible mayor the City had known. Another point I need to make is that the population of the City had declined continuously for 20 years until I was elected, Then it actually started to increase. Customer service begins at home and if you can't provide good customer service then your customers will start to leave once again.
Posted by Gary at 9:26 PM 3 comments:

Sometimes it Takes a Year or Two or Seven.

See this picture? It was taken in November 2007. It shows the doorway between the hall and the dining room. To the right is a door that we bought for $5 at a yard sale. The plan has always been to put that door up.I found a picture from 2005 and that door was in it too! It has been there a while. Now look at this picture that was taken in January 2014. You will notice that the door is still there. 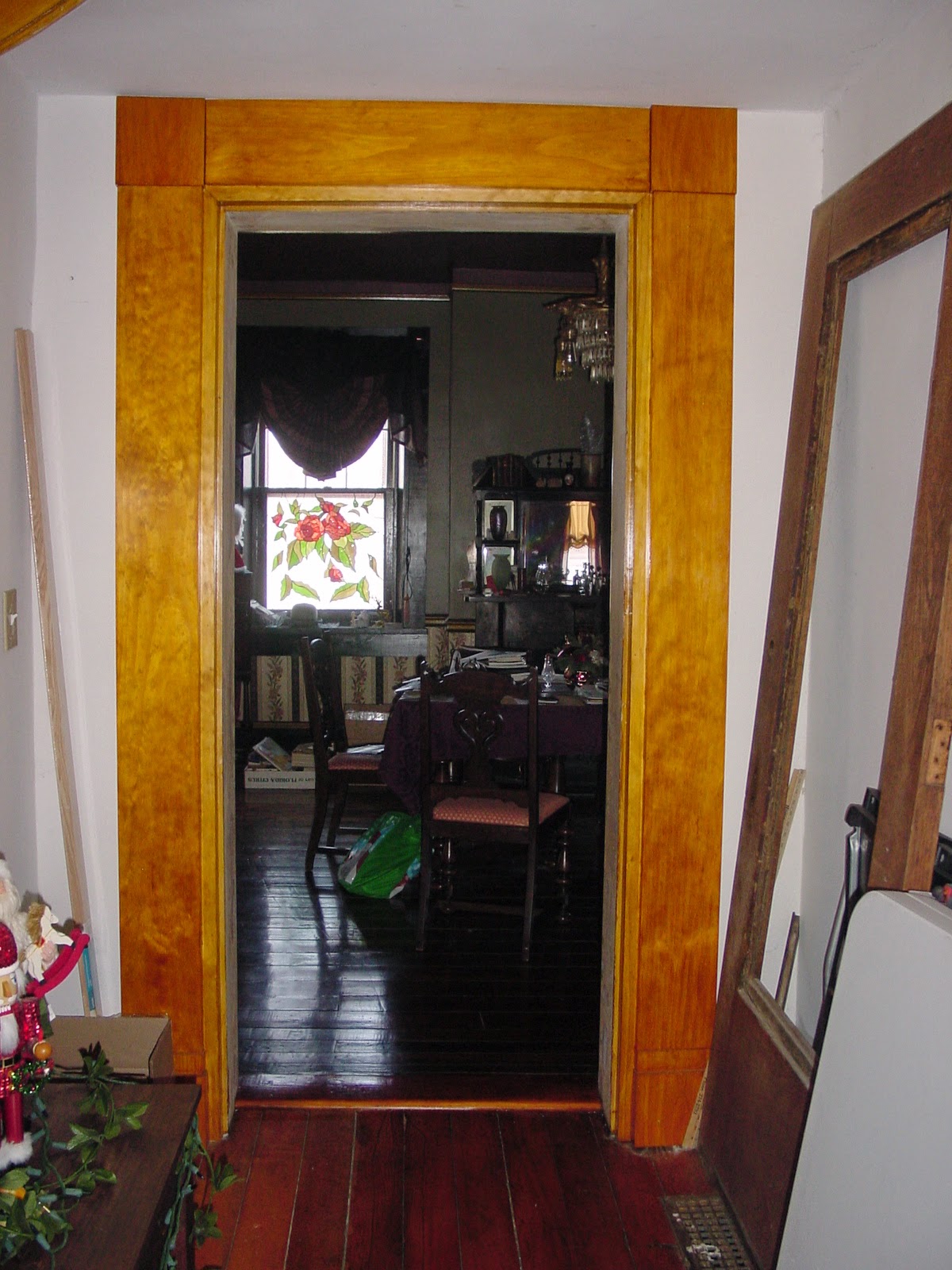 Now you would think that I would be smart and put the door up to keep the heat in the main part of the house. That is not the case. I never do things for obvious reasons. I tend to do things to solve problems. We have a problem with one of our three cats. Actually two of our cats are a problem. One is getting old and craps everywhere. It is runny crap, not easy to clean up. She is good at keeping to hard wood or tile surfaces and has a spot in the hall where she regularly leaves us a gift in the morning. I also think she has Torrette's syndrome but that is another story. The other cat is the real problem. She likes to come upstairs at 4 AM and call out a lot. If the door is closed she will scratch at it until someone wakes up and opens it for her. Then she will wander around and call out .... did I say A LOT! This is repeated at 5 AM and again at 6 AM. Been going on for weeks. I finally had one of hose "Aha" moments and told the wife that if I put that door up and something to stop her from jumping through it until I get the glass replaced it would stop her from coming upstairs and guarantee us some sleep. This past weekend, guess what I did? 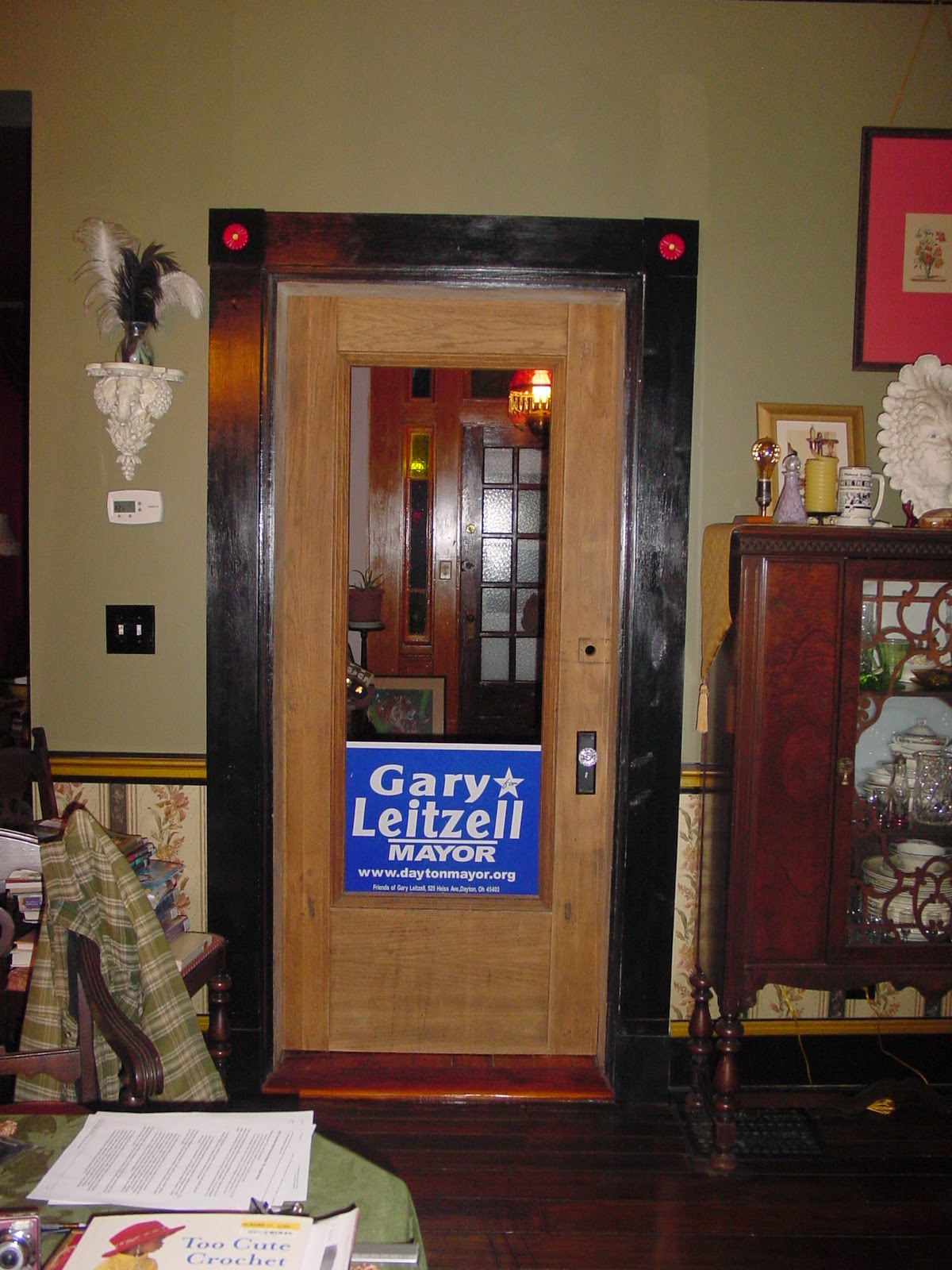 You can see that I reused one of my political signs from 2009 as the device to stop the cat from getting into the hall. I was so proud of myself, the next day I went and found the can of shellac and now it looks like this. Amazing what alcohol will do! 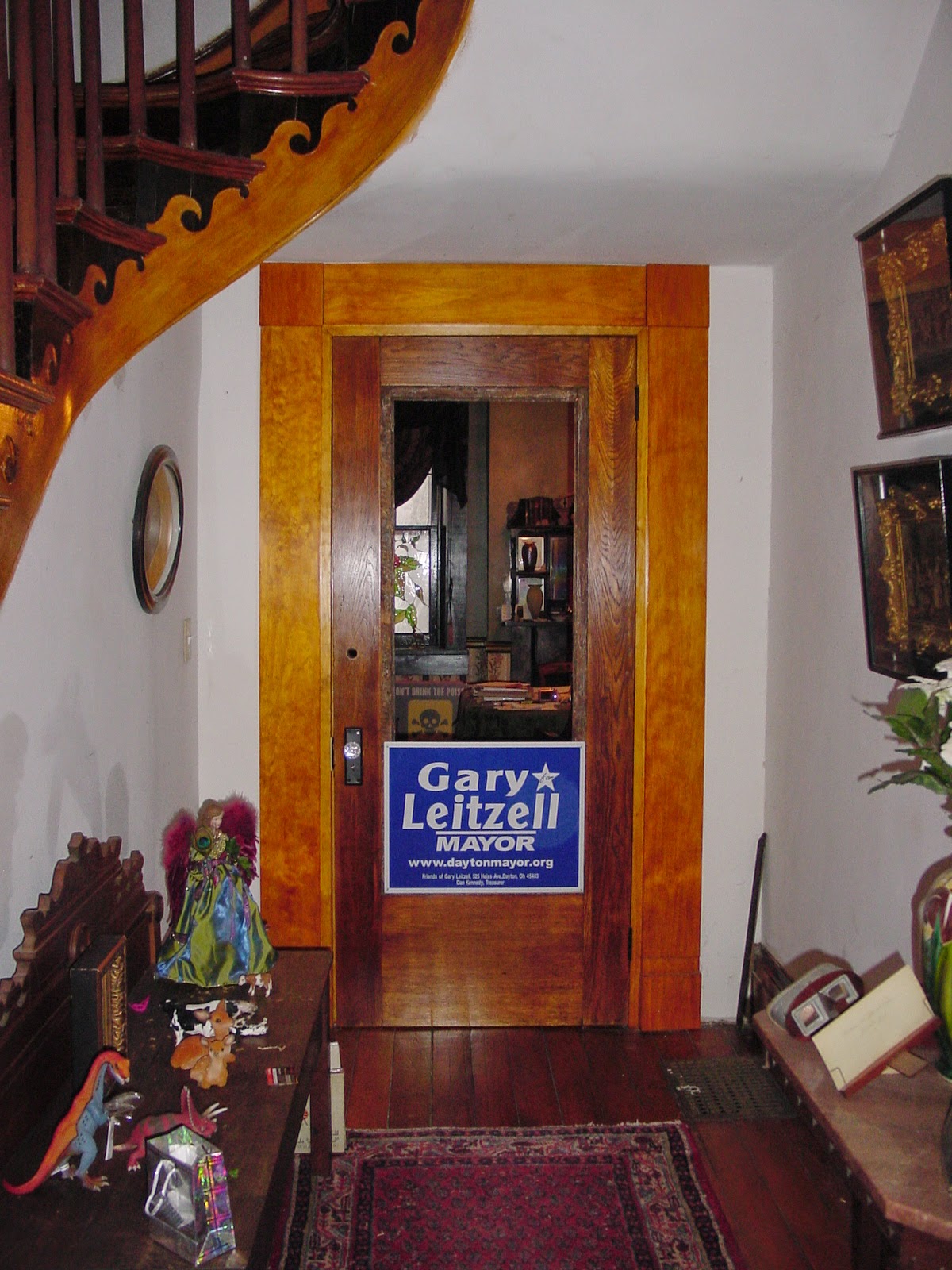 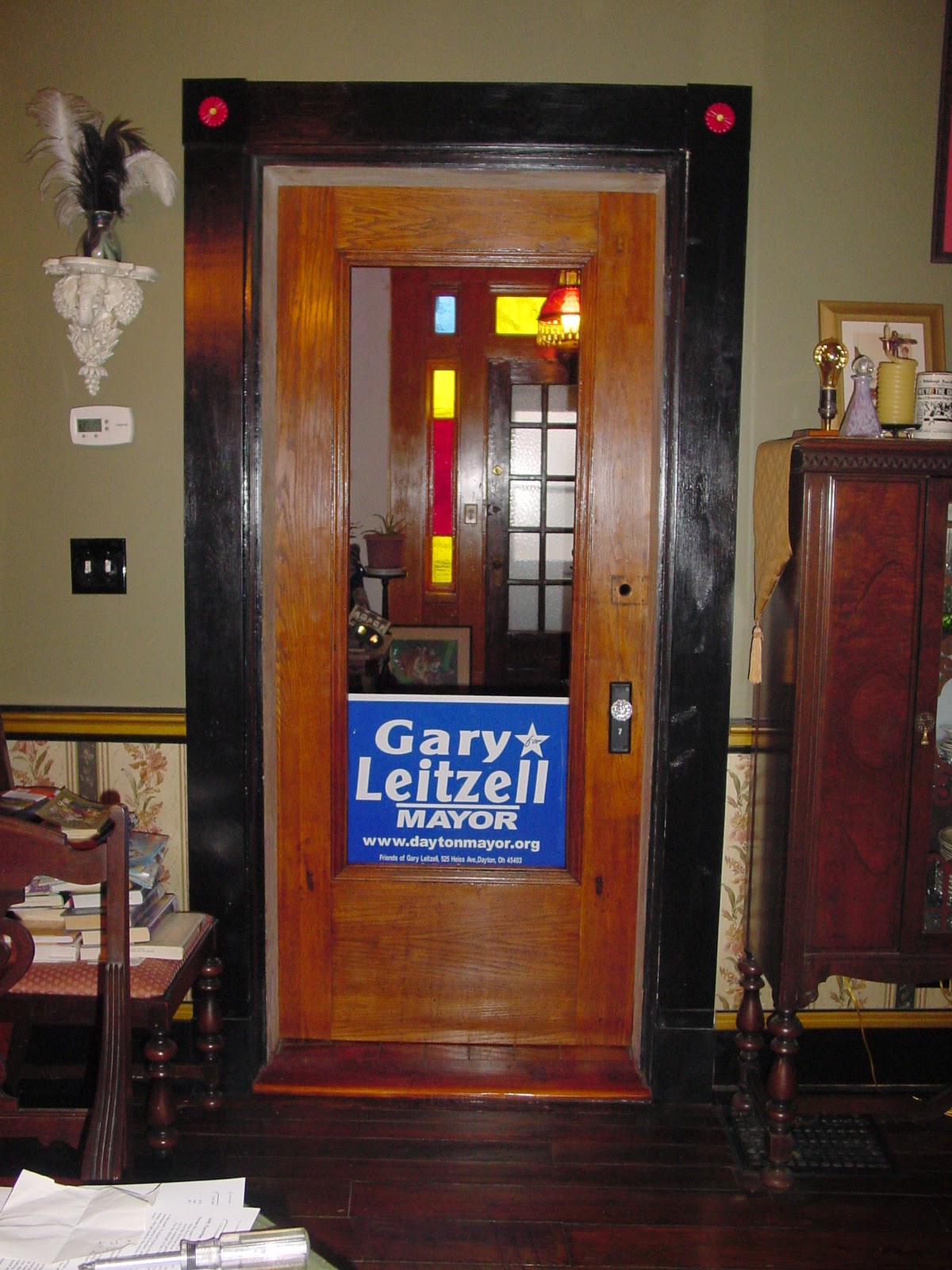 So now the cat is mad at us and hides away all day. That first night the she could no longer go upstairs and annoy us, she peed on one of the floors!
Posted by Gary at 12:27 PM 3 comments:

Back around 1996 I bought this phone from Design Tuscano. I think I paid around $200 for it. I bought it for several reasons. I liked it. It went well with the decor of the house and, since I had a couple of room mates at the time, it was not a phone that you can talk on comfortably for hours. The handle is heavy and it will not sit in the crook of your neck very well. If at all. It is also a good item to throw at bad people of you can disconnect it first! 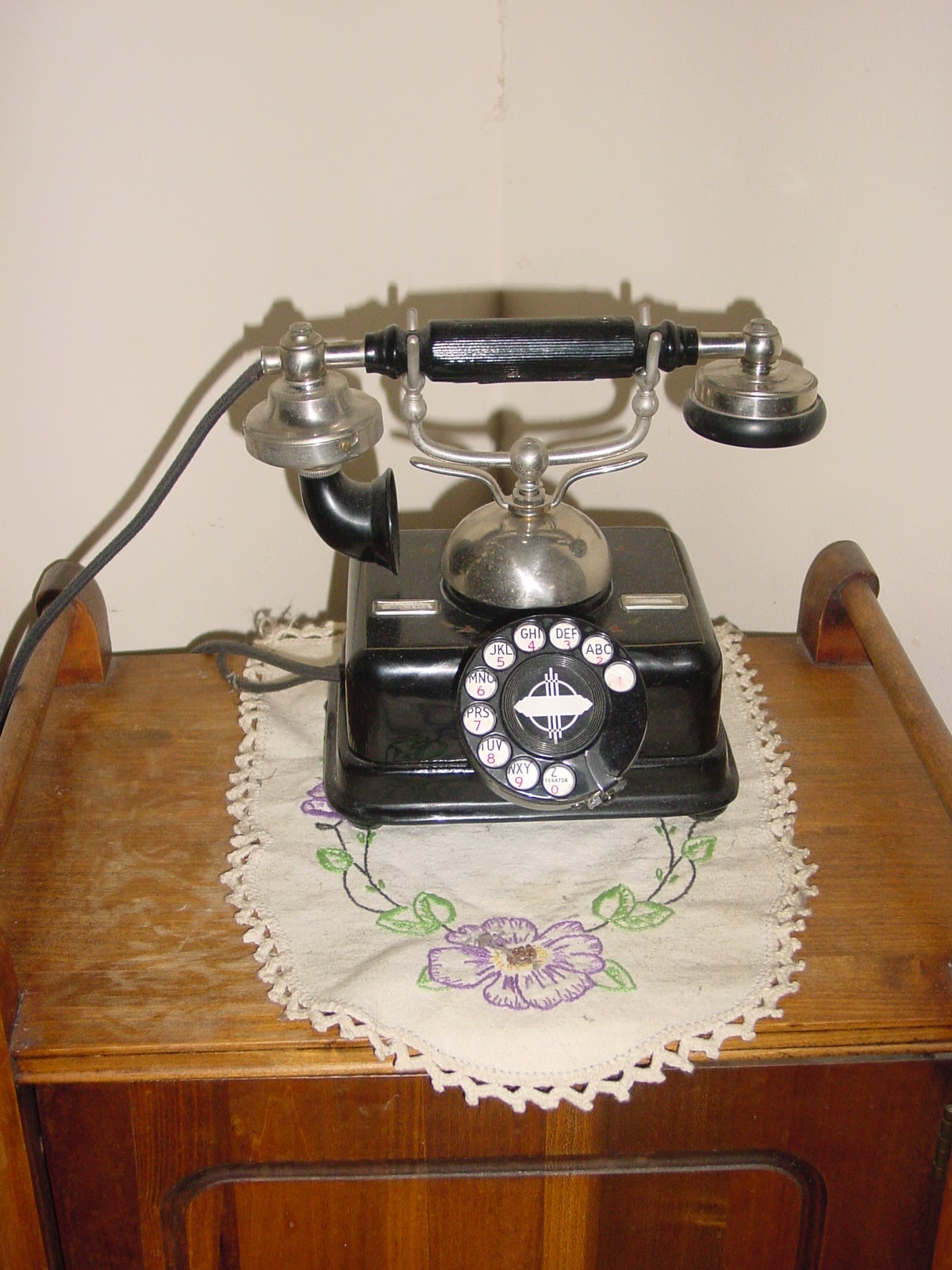 Sometime in 1997 I bought this phone at an antique mall for $60 and spent two days trying to figure out how to rewire it so that it worked. It still has the original 100 year old wiring. I got it to work perfectly after inspecting the refurbished phone's inner workings but since it is all original the sound is not great and it sounds like I am speaking down a tube to someone on the other end. Which in reality, I am. Someone once told be that I sounded like I was "far away" and since they were calling long distance it was true. I was far away! 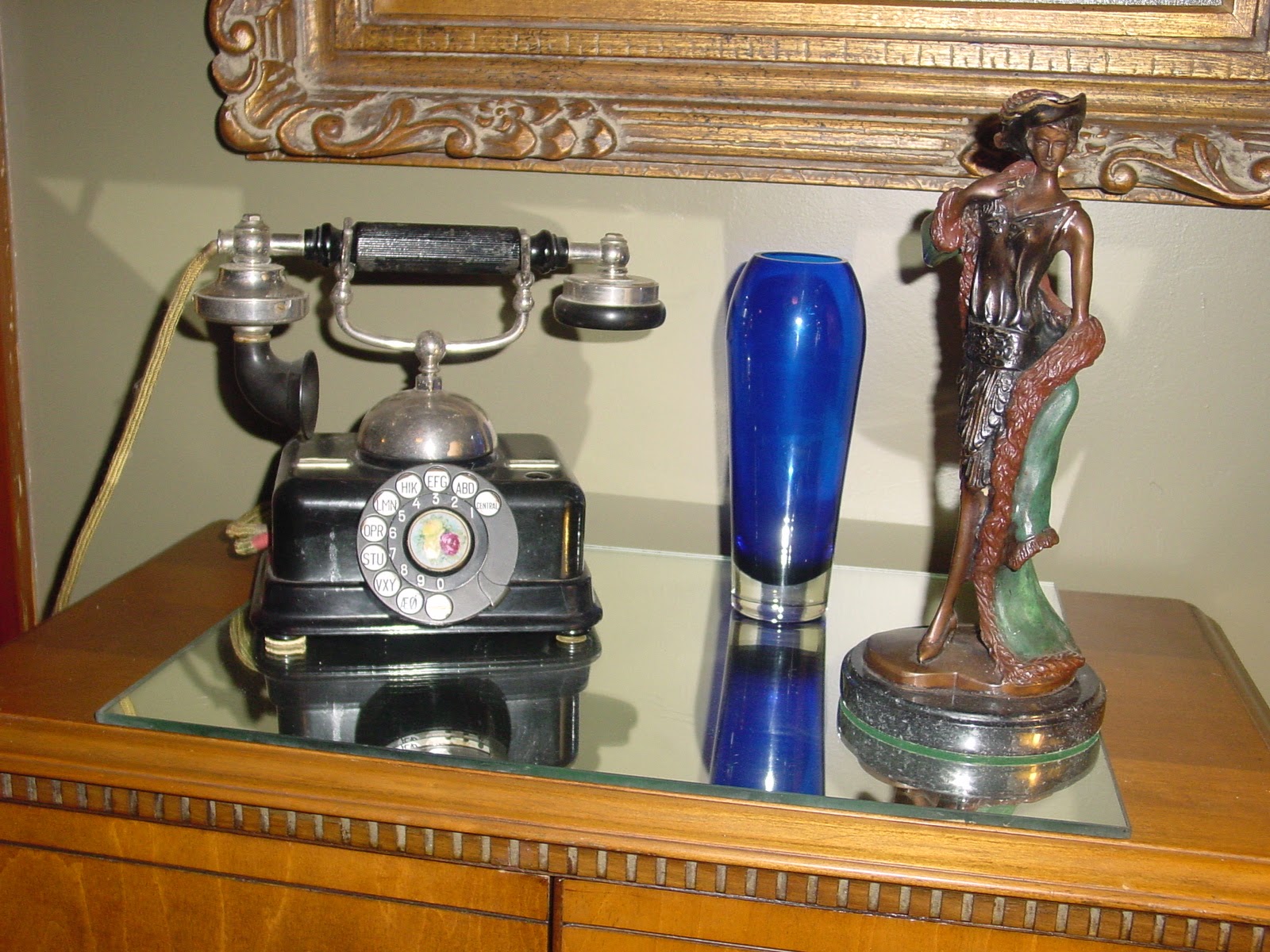 They worked great for years. Take forever to dial a number and we hardly use them but they are very useful if the power goes out. Our cordless phones need an electrical socket in order to work. Cell phones require charging and I don't own a cell phone. In fact, I owned a cell phone once back in 1988 and it looked like this: 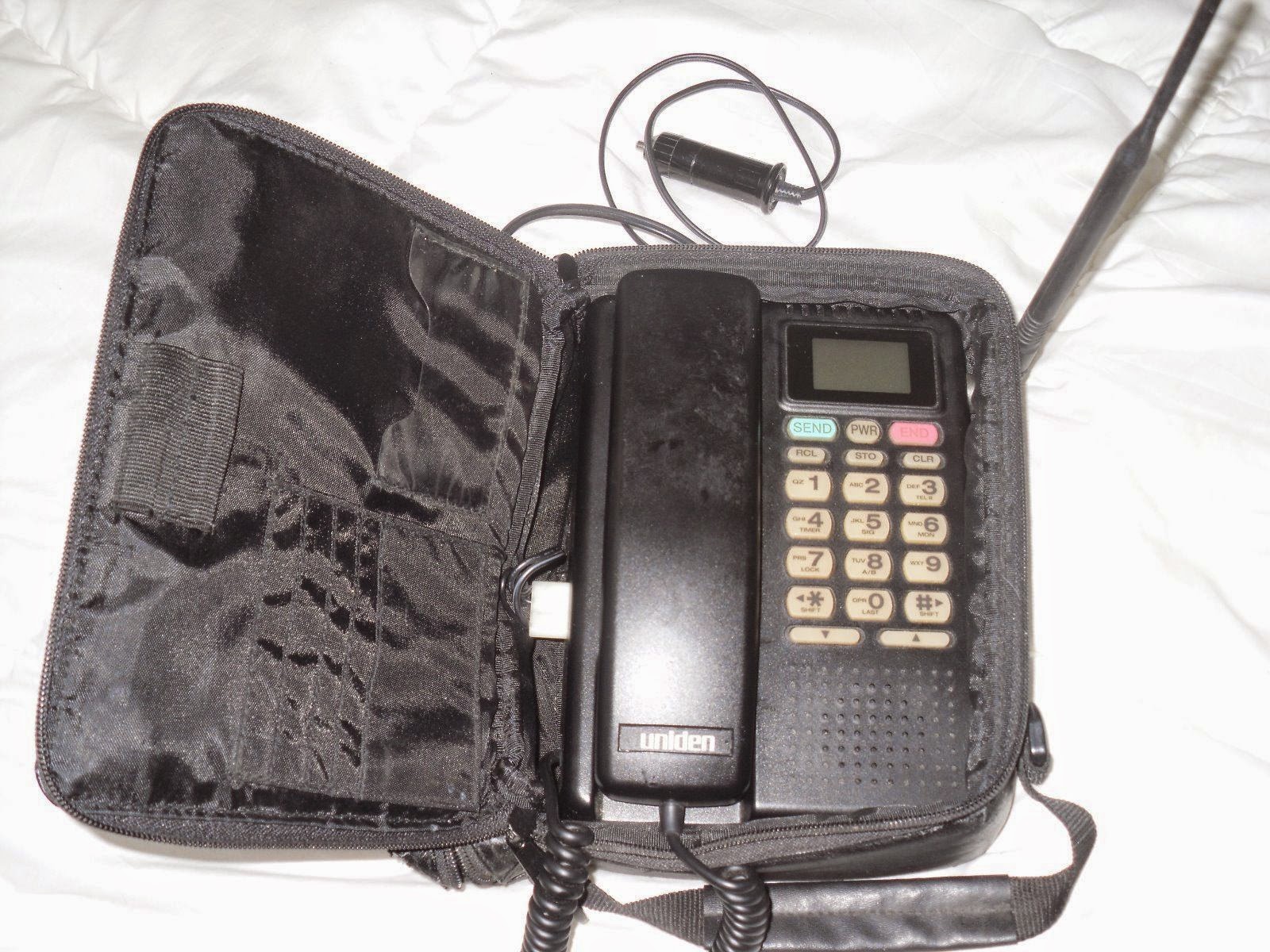 The little hand held ones that fit in your pocket cost around $2000 at that time. I didn't need a phone that badly.

Anyway, all was well until we switched our phone and internet over to ATT U-verse last year. The phones ring when someone calls but they could no longer dial out because the new equipment doesn't recognize Decadic dialing, otherwise known as Pulse. This bugged me. If we lose power, which we did in 2013 for three days, we have no readily available way to communicate except that I keep an old touch tone phone hooked up in the basement. This is so I don't have to run through three rooms and up the stairs to get to a ringing phone!

Well, one day I Googled "Pulse to tone converter" because there had to be a way to make these things work. I found this site which sells the little device pictured below. 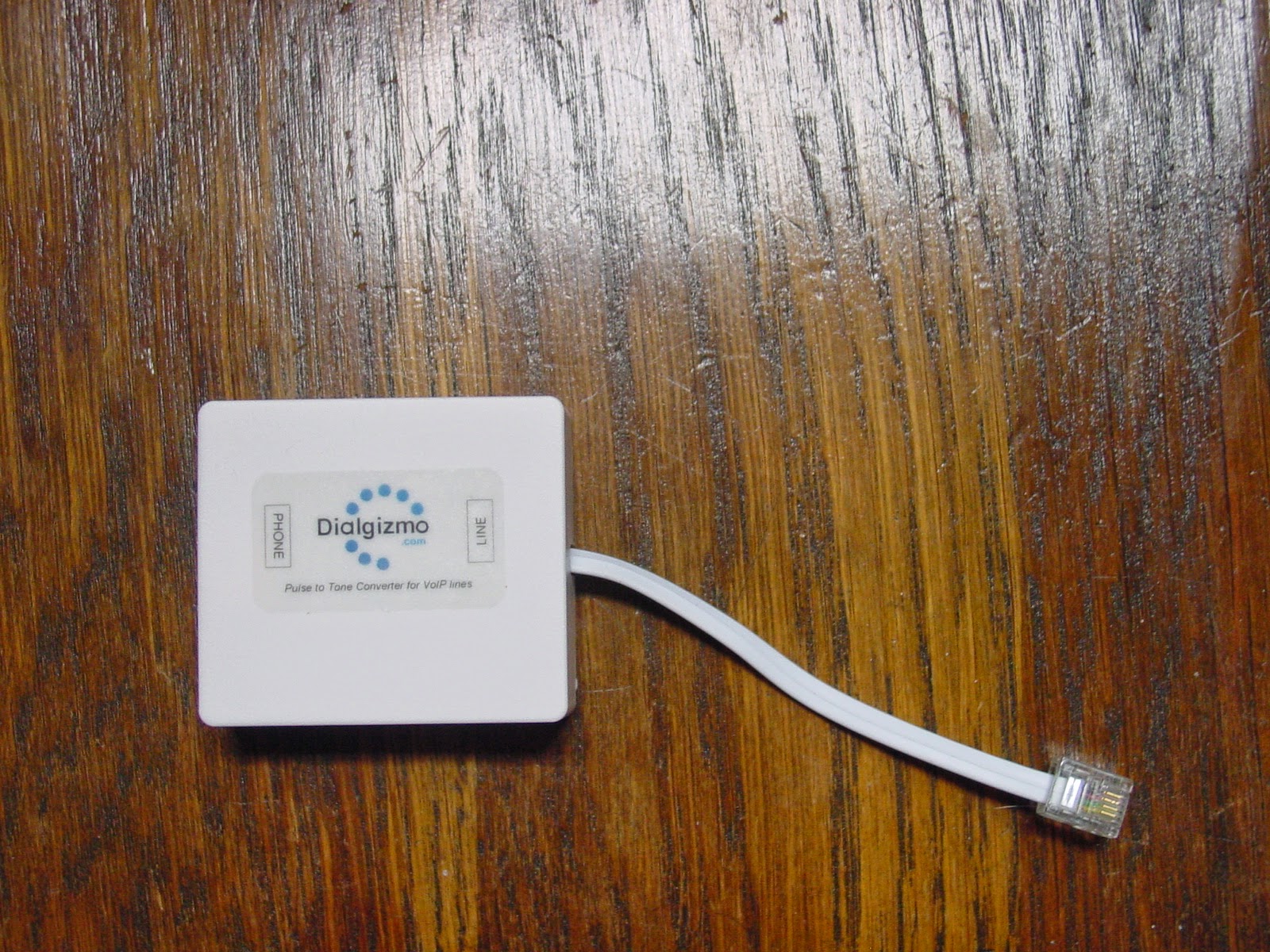 These ship from Australia and cost $50 with the shipping. These are designed to plug into the phone line directly but since I have two phones, I did a little wiring magic in the basement where my phone lines converge and routed the two lines that my phones are on to this so that now they work once again and I am a happy camper!
Posted by Gary at 12:34 PM No comments: