You need to go over to Dogs and Jen and post a big thank you in her comments because she IS the savior of these sites! I don't know what kind of other magic she is into but she sure knows how to handle a guys files! I understand the whole process took minutes to complete whereas I would have spent countless hours trying to achieve the same result.

For those who don't know, America Online is dumping "Hometown" which is its FTP space provider. I had to move 7 years worth of web page entries and photgraphs. All the pages that make up "The entire Crack House Story" and my website were scheduled to be terminated on October 31st even though I have paid AOL thousands of $$$ over the last 13 years. So you may find a few dead links or a couple of pictures missing from this blog in November. I have to go through all my entries, and there are over 470, to find and edit the links to the old host. The new hosting service is managed by a gentleman who lives two blocks away who is doing it for all the free publicity that I can give him! Just as soon as I get a banner ad or a button from him, I will add it to this blog but here is the link anyway.

So, what good will come of this? Well, I can dump my dial up service now since I"m losing the web hosting capability with AOL and get high speed internet! Whoo hoo!!! Travelling at the speed of light, Baby!
Posted by Gary at 11:14 AM 10 comments:

A little over two weeks ago when I had to fight with the tax appraisel folks I took this picture of our unfinished hearth in the main bathroom. Complete with water puddle on the floor from our leaky roof. 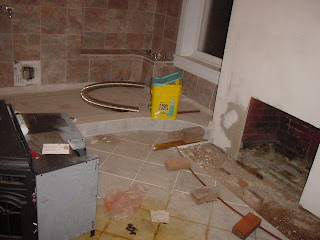 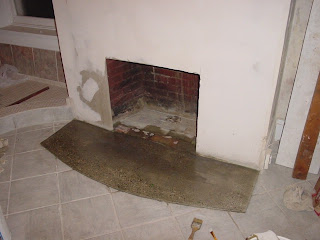 Here is a close up for all you polished concrete sceptics. 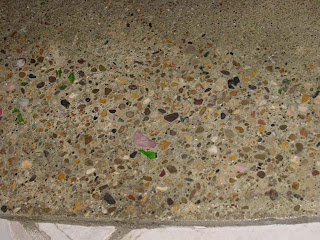 I noticed our tax evaluation hasn't been adjusted yet to reflect the market as I was assured it would be. Gasoline is way down, copper is way down, natural gas is down and our house value is still double what it was a year ago.
Posted by Gary at 12:26 AM 5 comments:

My Big Boy is Finished!

It only took about 6 real days of work, something like 320 bricks. 8 sacks of mortar, 12 gallons of water, two chimney liner tiles and 14 bags of vermiculite for a total weight 2400 lbs. of stuff that I had to haul up three flights of stairs and 13 feet up a ladder through a small opening onto the roof! 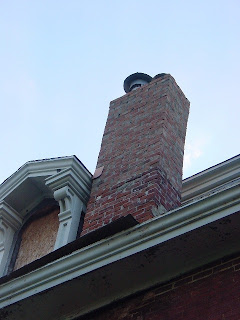 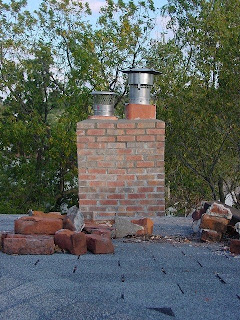 Now after some five years or so it is time to get all those old crumbling bricks from the original chimney down to ground level. I can think of one easy way to make that happen!
Posted by Gary at 11:11 AM 3 comments:

We just participated in another 17Th century re-enactment event. This one is local. We have the Sunwatch Indian Village here in Dayton. It is a 11Th century archaeological site that has several reconstructed huts. It is a cool site and a great place to host this type of event. We put on a trade scenario and a couple of ambushes circa 1680. At this time the natives won many of the encounters because matchlocks were the affordable weapon of the day and plug bayonets were not a common thing. None of our scenarios were scripted so we went with the mood of the day. Both trade scenarios went bad for the English trading party. I got jumped twice. I did manage to survive one of the ambushes though. The worst thing is my daughter has been influenced by the natives into thinking that I am one of the bad guys! 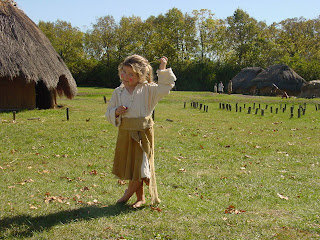 She was an active particpant in the trade scenario on Sunday. She even learned to shoot arrows and fire off my musket. The cool thing is not many 5 year olds get to experience history this way. The things she will do to run around barefoot in a leather skirt!
Posted by Gary at 1:33 AM No comments:

Land Contract vs. Rent to Own

You may have heard of these two terms in the past but not understood them fully. They are both forms of owner financing a real estate sale. You can Google both terms to find out more information than I will provide here because I'm not a real estate agent or a whiz at financing. Just someone who is aware of numerous ways to creatively finance a home sale.
Rent to own means just that. You set a price value on a house with a prospective tenant interested in ownership but lacking the credit or large down payment needed to buy a house at the present time. You get a down payment which is basically a right to exercise an option to buy a house at a pre-determined price for a period of 1 to 2 years. The option amount and a portion of the rent paid is applied to the purchase price if the option is exercised and becomes equity for the buyer. Real estate taxes are not required to be brought current until the house is sold under the option. This type of arrangement makes code enforcement, tax liability and maintenance the responsibility of the seller for the rental period. The seller also has the right to sell the property to another who will uphold the rent-to-own contract or increase the sale price of the house at the end of the option period.
A Land Contract is a sale of the property but a withholding of the deed by the seller until final settlement. A price is agreed to and the buyer pays principle and interest to the seller. Since a land contract can be filed at the county records office, the taxes must be paid current to the day of the contract by the seller and a recording fee is involved. The buyer should expect to incur some closing costs as a result but these are often applied to reducing the principle. The buyer is responsible for taxes, insurance and maintenance of the property. After a set number of years, generally three to five, the balance owed to the seller is paid in full by a conventional refinance through a mortgage company or a bank. At this time the deed is transferred.
In both cases, if the contracts are not complied to by the buyer, the property becomes the responsibility of the deed holder except with a land contract, the equity acquired by the buyer is generally refundable to the buyer as a result of liquidation of the property at auction if necessary.
So, if you want to buy a house and your credit is currently shaky, find a seller who doesn't need the money right away and work out a deal that benefits both parties. You don't need to look for "For Sale" signs either. You can always walk up to someones front door and make an offer though it is less likely to be accepted. Now if anyone wants to offer me a cool million $$$ for the "Crack House" I am all ears!
Posted by Gary at 1:28 AM 2 comments:

Not only do I have to go and fight with the real estate tax appraisal people next week, try to sell a house this weekend AND wrestle with the three cats to get them transferred to the "Crack House" so they don't get out during our open house. I have just been notified by AOL that they are no longer supporting their FTP space. The layout of this site will be much affected if I don't do something. I have 7 years worth of web pages stored there! I now have to move them and worse than that, I have to go through every single one and change all the links! So, if you have never read the link on the right that says "The Entire Crack House Story" you might want to go ahead and read all that stuff now because after October 31st it will all be GONE! At least until I find another free hosting site. Anyone have some suggestions?
Posted by Gary at 10:00 PM 5 comments:

The Plight of ELVIS.

I have been informed that ELVIS (Extra Large Volume Iron Soaker aka "the worlds heaviest bathtub") was abducted from it's retirement home though it may have eloped with an iron sink that appears to have gone missing at the same time. It was not, I repeat NOT slumped over, in, on or even near a porcelein telephone. I'm sure there will be reports of sightings before too long in many major cities across the U.S. If you see a cast iron shower tub, circa 1955 in a donut shop please let me know .........
Posted by Gary at 12:46 PM 2 comments: