OK, in England the plumbing is weird. You can buy copper pipe for plumbing. It comes in 22 mm and 15 mm sizes and you can buy plastic pipe, similar to PEX but more rigid which is joined with what we would call "gator grips" in the US. Of course in the US you can also use PVC or CPVC pipe for plumbing.
So, I have to re-route the plumbing in order to shut off the downstairs bathroom from the rest of the house. This I am able to do using the plastic Speedfit system however I run into a problem. The copper pipe feeding he bathroom is in a very awkward place behind the bath tub. In fact it was so awkward that at one point a hole was knocked into the wall to access the pipes due to previous leaks. Here is a picture showing a boarded up hole in a concrete block wall behind where the bath tub was located. 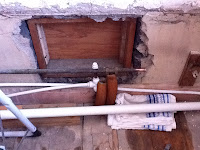 I was able to re-route the cold water line quite easily. It was all 15 mm pipe and the Speedfit fittings worked great. I had problems though with the 22 mm fittings over the copper pipe. They tended to leak. Here is a picture of the new plumbing in the water closet. Some of those copper pipes feed the radiator system. Don't get me started on that ... 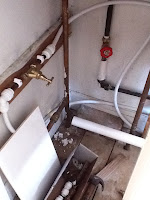 Now while I was trying to figure out the plumbing I went ahead and tiled the walls. I ran into a slight problem though. The tile cutter that we had borrowed would cut tiles up to 12" across. My mother had chosen 16" tiles. Of course this was realized late at night. This meant that we had to rent a long tile cutter. Since the stores in England tend to close by 6 PM, this was another delay.

The next day I rented the tile cutter but after cutting 8 tiles the device that split the tiles broke. This meant a quick return to the rental facility before it closed so that I could get a tile splitter that would handle the 16" tiles. Murphy's law was certainly at play! 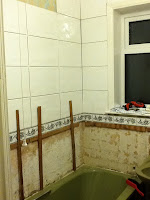 I also needed a hole cutter for the sink waste pipe and a carbide saw blade for a jig saw. Let me just say that things are quite expensive in England. By this point it is Wednesday and I was hoping that I would have been finished by now. No such luck though!

Next I will tell you why the 22mm Speedfit fittings were leaking. By this point I was frustrated with plumbing, however, I am used to it by now .....

Just so you can relate to everyone involved, here is a picture of my mother doing what she likes most .... shopping! 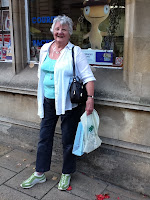 Helping Mother - A Comedy of Errors (Part one)

A couple of months back I got an email from my mother. She was going to get her bathroom remodeled and she was quoted $6000 for a room that was no more than 10' X 8'.
So, being the good boy that I am, I volunteered for the job in order to save her several thousand $$$. The job involved putting tile on the walls and installing new bath tub, toilet and sink.

Well last week I went to mother's house and spent 7 of the 12 days working on the bathroom project. Just like at The Old Crack House I managed to under estimate the time it would take to finish the job. When people ask about how I am doing with our house, I generally reply with "I am ten years into my three year project!" If all went well with my mothers bathroom it could be done in 3 days, possibly 5 days. Needless to say, nothing went well. My brother stopped by soon after my arrival and proceeded to tell me that where my mother lives the only water supplied by a main pressure line was the kitchen faucet. The water would then feed into a cistern in the roof that feeds all the other parts of the house by what is referred to as a low pressure system. I put my nephew to work right away pulling up carpet tiles and then linoleum tiles from the floor while I set about looking at the plumbing.

The first thing I had to do was isolate the downstairs bathroom from the rest of the house so that I could remove all the fixtures and still have water supply to the kitchen and upstairs bathroom. After turning off the water to the house I installed two shut off valves. One to the hot water line that came from the water heater and a cold water line that went to the cistern. I disconnected and removed the toilet from the room and turned on the main water supply that was located under the kitchen sink. Well, water started spewing everywhere! Upon close examination I could see that the water line from the kitchen went under the floor and came up behind the bath tub where it branched off to feed the sink, toilet and bath before going up to the cistern. The water line would not be accessible unless the tub was removed and it would appear that a hole had been put into the concrete block wall behind the tub in the past for this very reason.

I learned three things that day. One, my brother knows nothing about plumbing. Two, the water was going to have to remain shut off for at least a day since, three, it was going to take longer than expected simply because where mother lives the shops close at 6 PM and it takes 15 minutes to go 3 miles in a car.

Here are pictures of the bathroom before I got started. My mother and her friend had already removed much of the wall tile before my arrival. You can see all the lovely avocado green fixtures that were popular in the 1970s. However, this bathroom was done around October 1983 if the newspaper stuffed as a filler in some of the wall spaces has anything to tell us. The pages were dated September 23, 1983. 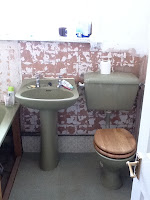 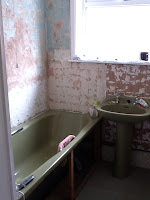 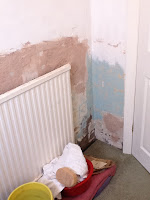 Now before I continue with part two of this saga, I do need to mention that mother lives in England .......
Posted by Gary at 10:30 PM 5 comments: