The basement walls are slowly getting plastered. Very slowly ... This wall here is where all my leaks are when it rains for several days. 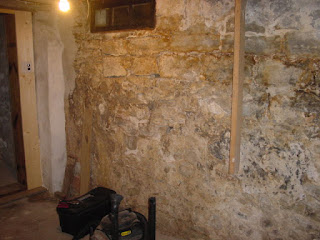 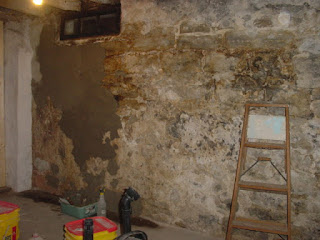 and then like this after a few applications of plaster over several days when I had some time. 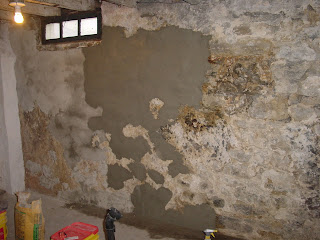 Here is another outside wall that will need quite a bit of work. I discovered that these walls were built with 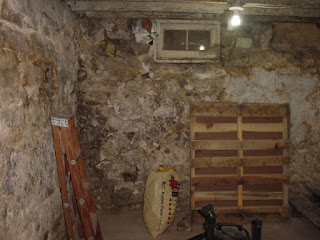 mud between the stones and not mortar while knocking off the dead plaster. In fact, after loosening a few stones and seeing some daylight through the wall it prompted me to install some galvanized pipe through the hole so that I can hook up an outdoor faucet on this side of the house when I am in the mood to tackle a little plumbing. This could be a while ....

Anyway, my door is made, which is the reason why this whole project began in the first place. My cats can expand their territory and confine their wayward toilet habits to the basement where house guests would not be inflicted with their gastrointestinal dysfunctions! 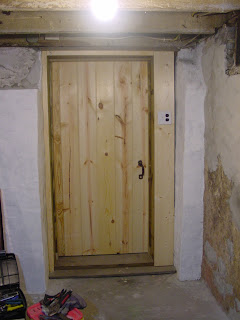 I get asked this all the time. My reply is "Slowly." However I have managed to get a few things done this month. Since most days this month it has been over 90 degrees Fahrenheit, not much is getting done outside the house. So I have focused on getting some things done inside. For some reason I got inspired to paint the front porch side door. Now it matches the screen door at least. 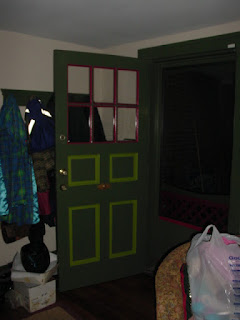 Having completed that project I became inspired to get the back door finished. This required a bit more work. Two windows and a median strip were busted out several years ago when some yahoo thought they would find something of value in the house. I also had to finish stripping paint from the door. It took about two days to get done but it now matches the screen door in the back. 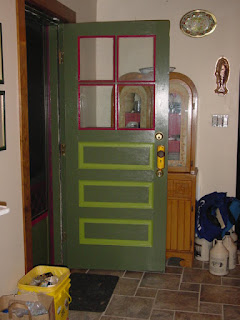 The next project that I took on has a unique story associated with it. It began several months ago when one of our cats decided that it was easier to poop on the floor than in the kitty litter box. Several months later the cat still craps on the floor and I am tired of walking into a house that smells like cat poop. Time to move the litter boxes to the basement except there are five rooms down there and a cat could get quite carried away exploring some of the nooks and crannies. This means I need to make a door to stop them exploring four of the rooms. It doesn't pay to be a perfectionist. Most people would just frame in the opening and make a door. However I have visions of one day having a plastered basement that doesn't leak when it rains and is nicely whitewashed the way it used to be about 100 years ago when people cared about their houses. Since I had four bags of mortar laying around, some polypropylene fibers and two buckets of slaked lime I decided that I was in the mood to do some plaster work. Unfortunately I have no before shots because limestone walls look like .... well ... limestone walls. Here are two pictures of the area of wall and the doorway that I have been working on. Next step is to mix some cellar paint and apply before framing in the door. I bought the wood for this already so you may see pictures very soon! 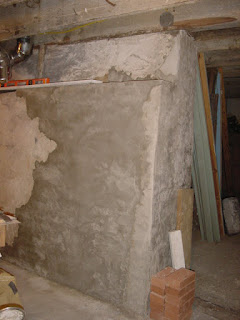 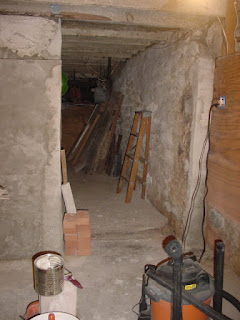 Finally I got around  to making something. Years ago, and it may have been as many as nine years ago, I bought a 3/4 size bed frame at an auction for $20.00. A 3/4 sized mattress costs the same as a full sized one and the bed is smaller so I figured that one day I would turn my bed frame into a bench. Well today is the day! I got the seat boards this week and cut, sanded stained and shellacked them today. Just have to lay a support across the center and my bench will be complete. Just another surface for Elizabeth to pile toys on ...... 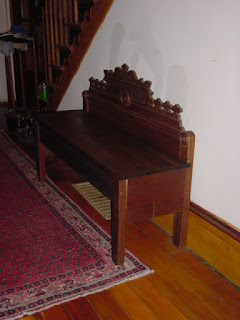