The wife wanted screen doors. Three in fact but let's start with two. She likes the idea of the wind blowing through the house creating a cross breeze through the kitchen. The screen doors were bought at a big box retailer. I believe it may have been Lowes. They cost $88.00 each which was reasonable. Well, now they need to be sealed and painted. We had one color that we could use. We have used it inside the house. It is a dark green. These doors needed some extra flare, so more colors were needed. That means two gallons of paint at $30.00 a gallon and then there is the screen door hardware. The front door was 3 inches too short and so I had to make a shim for the bottom of it. The back door isn't in place yet because I have to redesign the entire rear of the house just to accommodate it!

So, here is the front screen door. 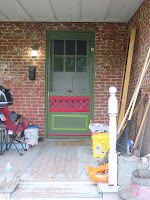 Now let me tell you what I have to do as a result. Paint the windows and doors. Redo the entire porch and install a second doorbell because you can't ring the traditional one installed in the middle of the door if the screen door is locked! It is very fortunate that I anticipated that this day would come and I ran doorbell wire through the brick and into the basement several years ago.
Posted by Gary at 12:01 AM 4 comments:

aka the Steampunk Clock.

I went to Ikea one day and among many other things I got a wooden, cabinet style wall clock that was on sale for $21.00 or so. Then it sat on my floor for a month or two until I could figure out what I wanted to do with it. Eventually I came up with an idea and went out and spent some money on some copper plumbing fittings and some electrical parts. I also ordered an assortment of different light bulbs and sifted through a bag of odds and ends. So, an additional $50.00 later I now have a unique wall mounted clock that looks like this. 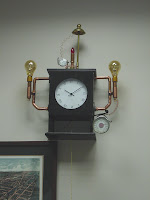 The two antique looking bulbs on each side are actually "Balafire" bulbs that have a moving carbon filament so that it looks as if a flame is burning inside the bulb.
When the thing is turned on it looks like this. 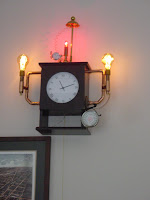 So, the big question becomes ..... "Where do I put it?" That was easy. It hangs in my office where I am slowly framing some weird and wonderful patents of inventions from Dayton, Ohio and placing them on a wall with an 1870 version of a birds-eye view of the city. 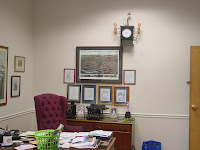 Eventually this wall should get covered in these patent pictures. I just need to find some time to go through all the patents. There are thousands of them. The step ladder was invented in Dayton, Ohio for all you home renovation enthusiasts out there. The clock and pictures are the perfect compliment for the radiograph machine, L.C. Smith typewriter and the Plasma lamp on my credenza!
Posted by Gary at 7:01 PM 4 comments: