The Root of All Evil

Wouldn't you know it. Three weeks after we move in the sewer backs up. This is a common story. Fortunately it wasn't so bad. Of course it would happen the week that I was out of town. I don't know if I ever mentioned it before but when we bought this place, upon closing we discovered that the sewer had backed up and my very first job was wading through two inches of water and sewage in the basement in order to clean the place up.
Anyway, I rented a large drain snake on Tuesday and proceeded to snake the drain. At about the 50 feet mark the snake was kinked and I could not get it to go down the drain. It kept winding the coil in the rotating cage such that it would not pull out in order to be fed down the drain. This was frustrating because I had a luncheon speech and a neighborhood tour to do this same day, so I must have changed my clothes five times between various events. Eventually I gave up and went to bed late. On Wednesday morning I returned the equipment and got another to replace it. I rushed home and got the job done before 11:00 AM so that Elizabeth could go to her playgroup by 11:30! Good job I'm not afraid of dirty work.

Here were the results;

A pile of roots bigger than my hand 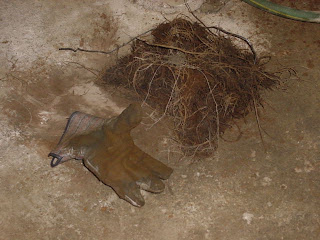 and the tell tale signs that the drain had been snaked! 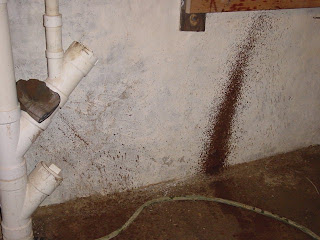 The Move From Hell (Part Two)

So this last week has evoked such intelligent conversation like;

"Honey, where is the (insert common household item)?"
"It is in a bag in the kitchen."
"Do you know which bag? I count at least nine that I can see."

Then there are these conversations:

"Cor blimey, what the phuck? I used to use this thing when I went to school. I wondered where it went. Guess we'll box it up and stick it in the basement."

"Do you think Elizabeth will want this old toy when she is older?"

We have also vowed NOT to buy any more books at the library book sales. We have boxes and boxes of kids books. We could probably open our very own neighborhood children's library. Guess who has to carry them up the stairs to Elizabeth's room?

So what have I done in the way of work on the house this week? Quite a bit actually. A neighbor and I hauled the claw foot tub to the third floor and got the worlds heaviest washing machine to the second floor laundry room without destroying the woodwork. I hooked it up and guess what? It doesn't leak - yet. Remember those two marble tiles I busted out in the bathroom a couple of years back because the pipe froze? Well, not replacing them paid off because the other pipe froze sometime in the last two years and when I turned on the hot water to the shower I had water dripping into the basement. I fixed that problem by cutting the copper pipe and using a "gator grip" cap. Where were "Gator grips" eight years ago when I needed them? I remember PEX was not approved for use by the city back then also. Anyway, the tiles are still out but those empty plastic wood pellet bags duck taped to the wall provide a temporary cover for the time being. The shower works great but we can't use the body jets just yet unless we want to mop the floor beyond the center of the room.
We had the phone number transferred last Friday but then I realized I had run phone line throughout the house but had failed to put any jacks in. So that was another trip to Lowes. Then on Monday the phone went out but the DSL didn't. Don't know if anyone has ever tried to contact the phone company when the phone line is dead but we had to stop at Deborah's work to call that problem in. I also got two of the four slide out shelves made for under the kitchen counter, the computers are hooked up, the faucet changed in the bathroom and a plug installed. Oh, I also had to get the smoke detectors installed before the pancake breakfast and when I burned the first pancake soon after opening the doors we knew they were working just fine!

So, here we are, finally moved in after only eight years and thirty days and about to embark on the busiest six months of my life. Guess how long we will be living out of boxes!
Posted by Gary at 12:37 AM 2 comments:

The Move From Hell (Part One)

Not wanting to sound like a post from "The Devil Queen" I will describe what I hope was the final moving experience of my life. We planned to move into the "Old Crack House" the week following my fund raising pancake breakfast. Which was great by the way. In fact, the local paper wrote a story. Deborah took the whole week off of work so we could pack and move stuff. Then we hit the first snag. Deborah had to show up for jury duty on the Monday. Of course, with all the people they could have chosen, she was picked ..... for a murder trial ...... that would last the entire week. The good news was she was home early on Thursday because she would deliberate on Friday. Since it seemed to be a slam dunk case, she knew what her verdict was going to be and if everyone was in agreement she would be home early on Friday. One person of the twelve did not agree and so it took the entire day to decide a verdict. In between appointments, amusing Elizabeth and attending the odd meeting, I managed to pack a lot of boxes.

By this time we are behind on our packing. We moved a few things over during the week in a borrowed van but the big move was going to happen on the Saturday when we would rent a 16 ft Budget Truck. We were only moving 4 blocks so we didn't mind having to make a couple of trips. While we were moving stuff out, the renter of our other house was moving stuff in. We warned her that we were running a bit behind on our plan and she had no plan to actually reside in the place until Tuesday. So we had four days to do a weeks worth of work. We moved on Saturday and we moved on Sunday which was much worse than Saturday because I miscalculated my ability to judge distances by 3 inches and clipped the bumper of the neighbors car with the rear step of the truck while pulling in front of the house, doing a mere $1200 worth of damage to her car. So while we are actually moving into the "Crack House", I have been relegated to the "dog house" but I've been there so many times I am used to it. We have been paying insurance premiums without an accident since 1990 so I was long overdue and since bad things come in threes, I will let you all know when I have the next two accidents and whether I make it out of the dog house before those happen! We moved again on Monday and got more stuff Tuesday and I still have to retrieve items from the garage and one corner of the basement.

I never realized how much crap we had! I hadn't seen some of this crap since I moved to Dayton from Pittsburgh fifteen years ago! If I stick it in the basement here it won't be found for another 30 years! I remember that old skit from Saturday Night Live, "If it's not Scottish, it's crap!" I can safely say I have very little stuff that is Scottish and what I have that might be would certainly fit in an extra small sporran! Of course, since it belongs to us, it is stuff, but in reality it is crap. Now here is what some of our rooms look like so you have an idea about the magnitude of our crap collection. 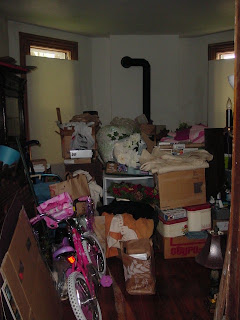 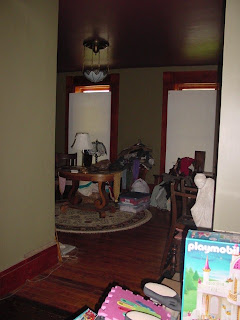 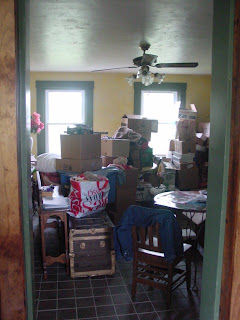 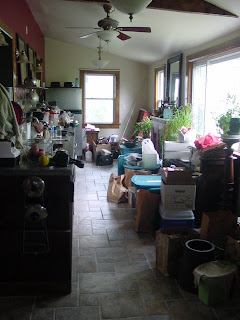 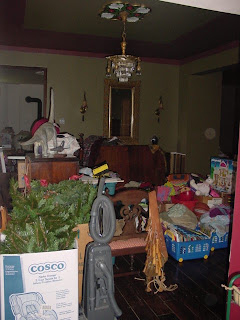