I hate to slam a local business but I will no longer be using Dayton South Veterinary Clinic located at 3200 Wilmington Pike Kettering, Ohio 45429 or the services of Dr. Daniel T. Brauer.

On February 20, 2017 the wife took one of our cats, Hunter, to the local Emergency Vet because she was constipated and had not had a bowel movement for several days. They did some tests and a day later we were able to take her home and were $1,290.96 poorer. The working diagnosis was as follows; Obstipation: large stool that is hard and not able to pass. Dehydration. Urinary tract infection with bacteria. Early kidney compromise with mild elevation of kidney value and arthritis where the back meets the pelvis. BTW, this cat is 18 years old. We came home with some antibiotics and a 10 day supply of Lactulose which is a prescription laxative. We scheduled an appointment for her to visit with our regular vet at the above mentioned clinic on March 1st. They kept her for three days and did a series of tests focusing on the kidney issue and the bill for this ended up being another $1,390 because of some special diet food. Some of those charges for medication and treatment could probably be disputed. 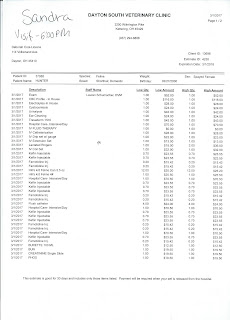 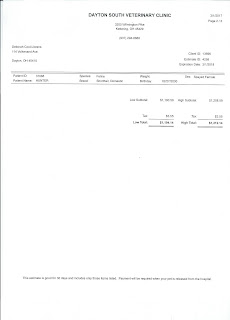 There is a $24.00 charge for ear cleaning. A $43.00 charge for Tresaderm which is used to treat skin disorders. A total charge of $107.94 for 7 doses of Famotidine which is used to treat ulcers. The cat was NOT diagnosed with ear problems, dermatitis or ulcers. Did they really perform these treatments? We will never know.The cat isn't talking and I can no longer trust this clinic to tell the truth. They sent us home with an expensive kidney diet that we were told Hunter loved but she actually wouldn't eat unless we deprived her of her regular food, and an antibiotic called Baytril that could have nasty side effects that we were not informed of.

Once home Hunter was happy and acting normal. We continued giving Lactulose in a smaller dose then held back about 3 ml of the Lactulose to see if she was fine with the bowel movements. She could detect the Baytril pills in her food (they smell awful) so we had to crush them and add some water so we could shoot it into her mouth with a syringe. Once we learned that a side effect could be irreversible blindness we stopped the Baytril. We don't need a blind 18 year old cat. On March 30, 2017 we noticed that Hunter was straining to poop again. She was successful but it appears that Lactulose would be something she would need for the remainder of her life. We made an appointment with Dr. Brauer so that we could get a prescription for the Lactulose. Here is where we began to distrust his services and question his credibility. He told us the cats ears were dirty and he could clean them. That was declined. That service was supposed to have been done 4 weeks earlier. We paid for it. He then went in the back room, returned and presented me with a 160 ml bottle of Lactulose. So I pay the bill. It is $180.00. That is $52.00 for the office visit and $128.00 for the 6 oz bottle of laxative that grants 3 refills that I have since discovered can be bought through Kroger Pharmacy for $7.00. Online, a 16 oz bottle is around $16.00. Here is what Drugs.com lists for pricing. 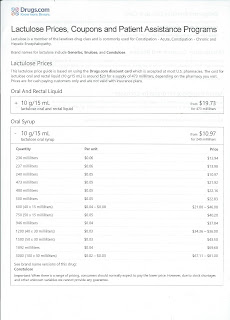 Here is what a $128.00 bottle of Lactulose looks like and here is the bill to prove it. 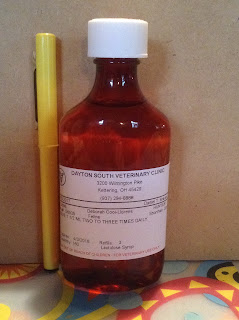 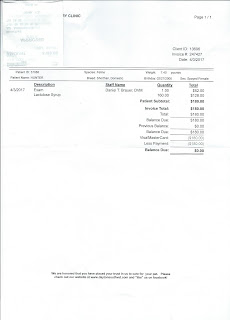 It gets better. The next day I go to return the bottle for a refund and get a prescription. They will not take the medicine back and refund my credit card. Dr. Brauer and one of his employees both stated that they can't by law take back the medicine. That is not true. There is no law that states that he can not do this. He can take it back and refund the money. What he can not legally do is re dispense the medicine. He has to destroy it and in doing so is at a loss. Fine I get it. He is still a liar though. How about charging me $7.00 for the bottle and refund the difference. They won't do that either. He could offer to sell me the drug for $20 which is still excessive but a more reasonable choice than having me pay $128.00. He didn't. Fine, I will contest the charge with the credit card company and he can explain to them why he charges 18 X the market rate for his medicine. He was fine with that idea. I can also file a complaint with the Better Business Bureau and post a negative review on the clinic Facebook page. He can explain to the BBB and the 763 fans on Facebook why he charges excessive fees for medication. Now he charges me $10 for the “Outside Pharmacy” prescription (which he is allowed to do) so I can get the next bottle for $7.00 but circles zero refills. What a racket. He is willing to prescribe the same medicine through his pharmacy and charge $128.00 each for up to three refills but is not willing to prescribe the same for using a regular pharmacy that charges just $7.00.
As far as I am concerned the credibility of this business is completely shot and I can no longer trust any of the staff to tell me the truth. Never take your pet to this place if you don't wish to be taken advantage of.