How to Get Rid of Stuff the Slow Way

Now that my relationship with the City has changed I want people to know that I am still treated just like every other citizen when it comes to rules and regulations. I was issued a warning notice because my yard standards were a little lacking this spring. I still had a small pile of wood in the front yard left over from the porch removal last fall and a moderate pile of concrete and other crap in the back yard after the removal of the fire escape as part of the roof restoration last September. I was also told to cut my grass and the wondrous collection of weeds that have accumulated after the heaviest seasonal rainfall this city has experienced in recorded history. The bad news was that I effectively had 5 days to comply and since my schedule had been put together months in advance with little time to spare, this meant that I had one day to make a difference. Now I could have called for a roll off dumpster to be delivered but those are not cheap, require a location for placement and are limited to being available for a certain number of days before they are hauled away. I used one of those last September, you can read about it HERE.

Now that someone has acquired the house across the alley I didn't think it would be very neighborly to plonk a dumpster across their parking space for several days. I also didn't have the time to fill it to the top in one day. So I tried something different. A friend had told me about a program that is run by Waste Management called "The Bagster" Since I saw a real potential of using this program within some of our inner city neighborhoods to reduce costs in City Hall, I was willing to try this out for myself.

When you analyze the cost it is actually cheaper to use the baggies than to rent the roll off dumpster from Waste Management. Last September we paid a grand total of $407 for a 4 ton dumpster and an additional $21.75 for an extra .75 tons. So in essence three of the bagsters would hold 4.5 tons of debris. The dumpster cost would have been $421.50 for 4.5 tons. I only used two of the bagsters this spring. The bags cost $30.00 each from Lowes or Home Depot. With tax the two bags were $64.00. Three bags would have cost me $96.00. The pick up cost in my zip code area was $89.00 for the first bag and $69.00 for additional bags. Once again, I only used two bags. Here is a picture of them! 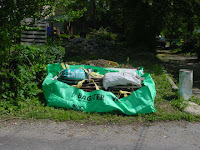 Three bags would have cost a total of $323.00 making it almost $100.00 cheaper to use the baggies! Cutting costs and getting the job done is what I am all about. I will probably need to use two or three more of these bags to empty my basement of all the excess wood and make some room down there, not to mention that I still have much concrete to dispose of.
This program is not available in all areas and I don't make a dime promoting it. I just like to let people know that they have choices!
Posted by Gary at 9:48 PM 4 comments: