There are two bedrooms upstairs at Helen's house. Both rooms were wallpapered and both rooms had experienced water damage in the past. The smaller bedroom looks like this from the hall. 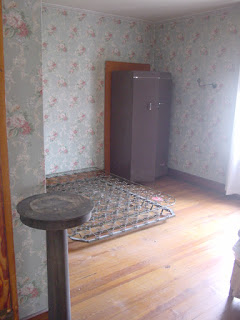 There was some water damage where  chimney flashing had failed. Helen had this chimney taken down below the roof line at some point long before we bought the house from her. 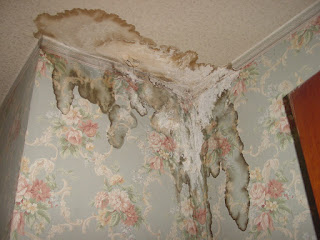 The larger bedroom has three windows, all of which need new sash cords. It had two wall lights and funny enough, not a single wall socket except one on this sconce light. 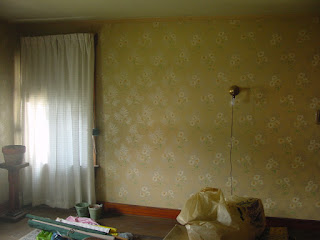 This room had also experienced water damage from a leaking roof around another chimney and repairs had been done such that the one wall looked like this. 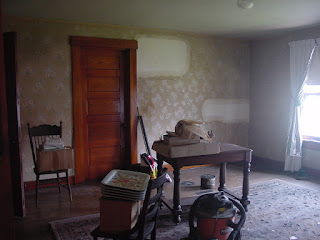 It was always my intention to try to preserve the wallpaper in these rooms but when I tried to texture the ceilings with joint compound and a roller, the paper on the ceiling peeled off and so I decided to strip the ceiling and the walls down to the original plaster so that I could paint the rooms.

The wallpaper was fairly easy to remove. I used a spray bottle full of water to wet the paper and a flat scraper to remove it after letting it soak for about 10 minutes. The small bedroom had three layers of paper on the ceiling and two on the walls. Here it is after stripping. That is an original gas wall fixture mounted on the wall. 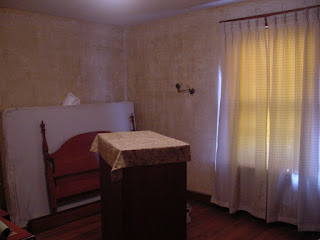 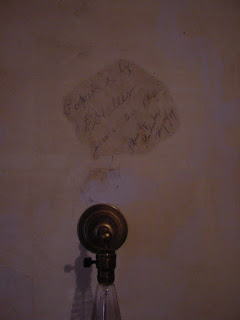 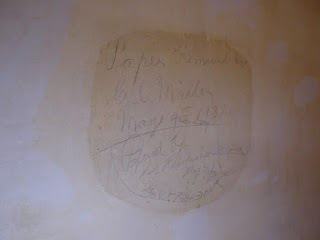 So, I plan to leave these areas exposed for posterity but will cover them with a picture or a mirror because one day this house will belong to someone else and they may have an interest in the history. I suspect the second floor was extensively remodeled in 1939. The bathroom was installed in what was formerly a closet. A window was added. I know this because I have photos from before 1940. Furnace ducts were installed to the second floor and the floor in the small bedroom was replaced or sanded. Tomorrow I get to paint the now textured ceilings in these bedrooms and soon I can show pictures of the finished rooms as soon as I decide on a color scheme!
Posted by Gary at 3:21 AM 1 comment: