The Saga of the Roof

The local newspaper reporter contacted me last week because they want to run a story about me having a light schedule for the month of September as the mayor. Here is their story;

The rumor that the reporter got was that I would be on vacation for the month of September. This is not true. I will be fixing my roof! I will be attending commission meetings, school board meetings, attending my regular morning news appearances and doing a few community related events. Weather will dictate if I attend the office but I have worked from my home for so long, I really don’t need to be in the office in order to much of what my job entails. I can communicate by phone from home and I can access my office computer from anywhere in the world and so email communications can be addressed.

Now for the real story that needs to be told. The slate part of my roof and the box gutters need to be replaced. The slate was put on in 1890 and has outlived its usefulness. The dormers and aluminum windows that were installed in the 1960s were not installed properly and the shingle that was used for flashing has deteriorated. This is specialty work. Box gutters and slate roofing is an art form that requires craftsman skills. We had five companies look at the roof and gutters. Four refused to do the work because it was too specialized for them. Including one guy who employs Amish workers! The fifth company quoted me $43,000. Not being a person who is put off by hard tasks I did the research and calculated that I could do the entire job myself for about $10,000 and still have some really cool tools to show for it at the end.

Since the newspaper plays on the aspect that roofing is not as specialized as mayoring let me describe and show for you exactly what I will be doing since, after all, it has been indicated that I will not be working hard.
Firstly, this fire escape has to be removed. It is already in very poor shape and removing it is likely to be more dangerous than replacing the roof. 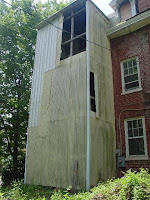 This porch needs to be removed. Once gone I will make the decision to either replace with a smaller porch or to not replace at all. 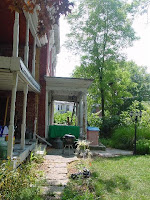 Here is a view of the gutter from the back of the house. It is fortunate that the trim is actually made of metal. As you can see it is failing and the wood has rotted out. 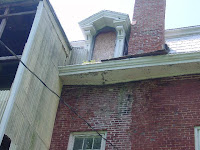 Here is an interior view. I have been jacking up this part of the roof for the last three weeks so that I can put some struts back in. The original posts were removed about 40 years ago and since then the roof has been sagging. 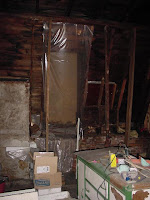 People don’t know what box gutters are. Here is a picture of ours. You can see they are in bad shape. I will be replacing the tar, rubber and rusted metal with copper. Making copper gutters from sheets is an art form that I am willing to learn. Of course there are some areas where the wood base has rotted out and needs to be replaced. That is an art form as well. 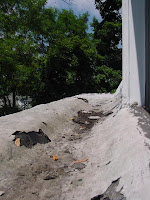 I am posting this article because I want people to realize that this is no vacation. In fact, given the choice between being in an air conditioned office working the phones, meeting citizens, making speeches at dinner events OR doing hard physical labor 40 feet above the ground in hot weather crafting a roof that should withstand 100 years of brutal weather, most people would chose the former. However, I am not like most people. I am not afraid to do what it takes to get a job done right for the least amount of expense. Fixing this roof myself is worth $33,000 in real money to me. If you add income taxes that I pay out, it would have cost me over $50,000 to pay the only company willing to quote me a price. That is more than I make as mayor.

I look at this way. I am saving a piece of history by fixing this house properly. I am investing in my future stake in the city and I am showing people that I am not afraid to get my hands dirty trying something new.
One day the editors at the local newspaper will realize that. What is that old saying? Extra ordinary people achieve extraordinary things ....
Posted by Gary at 10:29 PM 8 comments: