The Debacle of the Mud Room

There is what really appears to be an enclosed porch at the back of the house. Helen used to have a clothes dryer back there and a large cupboard on castors. There is also a built in set of cabinets. I have these "before" photos. 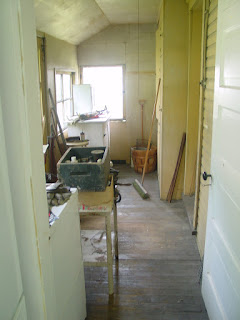 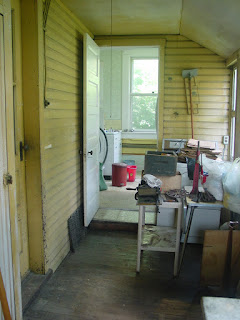 I don't think anything major has been done with this room since the 1930s. What's more, the room has no insulation other than some blown in rock wool in the flat part of the ceiling.
Last year I got the wood walls painted flat white but the wife wanted the walls insulated. That meant removing most of the drywall that was installed in a piecemeal manner back in the day. When the drywall was removed it revealed a roof leak that was going to have to be dealt with. Now I don't know which I hate more, roofing or plumbing but I had to deal with the issue.
This roof still has the original cedar shakes under ..... wait for it ..... four layers of shingles! I don't want to have to haul sheets of 8' X 4' plywood up a ladder so I have decided to strip the roof down to the original shakes and put a metal roof over those.
For anyone who cares, on election day I won in a local contested primary to run for county commission. The next day, to celebrate, I started to tear off the roof at the back of the house! 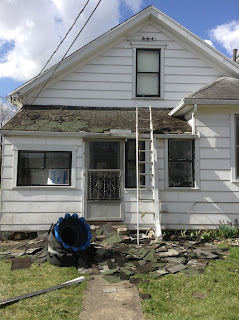 It took two days to get the shingle off and another day to get this far. Then it rained for several days. 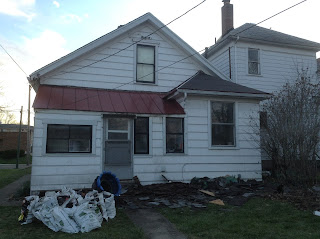 Those bags left over from filling the wood pellet stoves sure came in useful this year. On the rainy days I went inside and installed insulation and drywall. Then smoothed out the joints.
As of today the roof now looks like this. 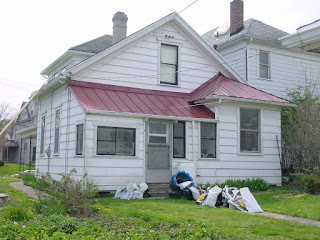 Only now I have to do the next section above the attic room where we have an existing roof leak. So I just need three consecutive days without rain to remove shingles on one half of the roof and install tar paper. These are the special attachments for my boots that I had to buy just so I could stand on the metal roof. 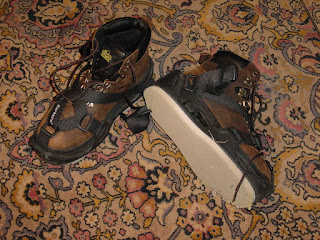 And here is the mudroom before painting the remaining walls and door white. 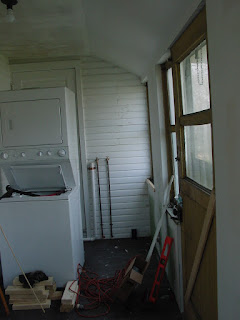 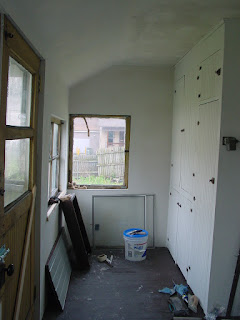 I think Helen would like the improvements to her house.
Posted by Gary at 12:13 AM

Thank you. I am enjoying these updates.

Don't give up, because it is worth it in the end or so my wife says. I am not sure what drives me mad more either, plumbing or electrics but either way I have to get it done - my wife likes just to sit and watch! I am sure one day I will shock her with my skills.