Into the Abyss: Call Your Local Privy Digger!

Our house had a well back in 1845 when it was built. We thought we could identify it's location from this photograph taken in 1929. 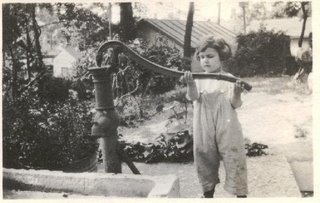 We have a description of the well from 1936; it was described as "hand dug and deep". We also know that there was a limestone trough in front of the pump and that the well supplied many people with potable water after the 1913 flood as it was one of the few wells that had not been condemned by city ordinances.

As the years have passed, the location was revealed when the soil used to fill in the well subsided leaving a deepening hole in the back yard. We have discussed the fact that it would be cool to dig out the well and use it as a source of water for the garden. We could always move the huge limestone slab that covered it back over the hole and attach a pump or we could run a water line from the house to the well an make a faucet to resemble a pump. We could also build an old fashioned brick or stone well with a roof and a bucket and put a cover over the opening. The problem was, you guessed it, digging out the dirt.

We have a guy in the neighborhood who is a "Privy Digger". Basically he is a bottle collector who finds much of his treasure by digging up former outhouse locations. Since bottles were not combustible or biodegradable, they were often thrown into the backyard outhouse hole opening. Some of these cesspits were stone lined and dropped 15 to 30 feet. Some of the older bottles are quite valuable. I had asked our Privy Digger if he would like to investigate our well sometime. He came over on Saturday with a collector of pre 1900s bottles. They probed around the property for our former outhouse location first but found nothing of interest. Right now the back yard is overgrown so much of it is not accessible. As we clear the bushes and weeds he will come back and probe some more.

Reluctantly they decided to dig our well. Within a few feet he was turning out all kinds of jars and bottles, lipstick containers, toothbrushes, batteries, lightbulbs, some plastic items and broken china. After a few hours and about 8 feet down he stopped. The items coming out of the well were likely dumped there around 1945. He did recover a plastic advertising calendar from 1944. Some of the items were interesting enough for him to want to take home but the bulk of it was of little interest to him. He left us with most of the days haul. He was back on Sunday morning with a helper who is new to the hobby and left fewer items for us to admire. Here is what I saw; 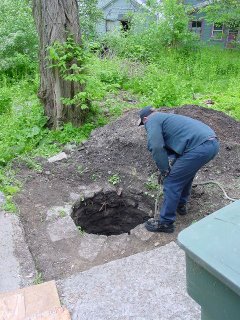 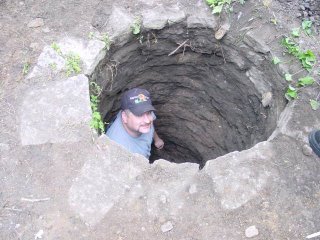 Then I had to go off to work on the old theater building down the street.
If they were able to find as much as they did on Saturday I suspect the new guy was interested in many of the bottles. The bottles are interesting but not valuable or exceptionally old. Many have design patent numbers on the bottom that were issued in the 1930s and are very art deco in design. One Revlon nail polish bottle has a design patent issued in 1936. A tube of Ipana toothpaste was also recovered and based on its design indicates a pre 1947 disposal date. To us, all this stuff is interesting because it adds to the history of the house. To a collector who digs many holes, our well seems quite plain.
They are down about 15 feet and there is no water yet and at least another 7 feet of debris.
We speculate that at some time between 1929 and 1945 the well was condemned by the city. After that it became the backyard garbage dump. There seem to be layers of ash in it which would have come from the coal furnace and the fireplaces.
What the Privy Digger is hoping to find is an "Early dump". When the well was first used as a garbage pit, he is hoping that they cleaned house and threw all kinds of bottles out. I know he found the top of an 1800s bottle so his interest has been maintained. The thing that helps with our well is that I don't want it filled back in. So he can take his time with the project. I just have to cover the hole with sheets of OSB board. I'm happy he is finding stuff. I certainly didn't expect there to be as much as there actually is.
When I stopped back at the house after working on the theater I took this picture; 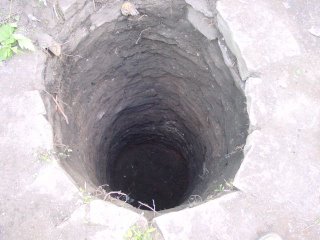 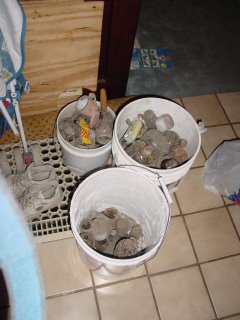 We can clean these up and display them on a shelf in the glass case we have for the parlor. If all this is in our well, I wonder what could be in the privy hole!
Posted by Gary at 1:28 AM

That is sooo cool. My house was moved to it's new site in 1958 so there was never a well. Darn.

That is such an interesting way to find old treasure but I don't think I'd like to dig through petrified poo to get it. I'd be afraid I'd contract typhoid or some other olden day-type disease.

perhaps this is what Indiana Jones really did in his spare time!

Awesome well. The ones here around aren't nearly as nice as yours. So, were all the cities wells eventually condemned because of contamination?

We recently had some trees removed and the lumberjacks found an old well cover. But there's so much overgrowth we have not found the actual well location. I'm not sure where to look on city maps or old deeds or something. Maybe it's just junk.

John,
I suspect that all wells were condemned due to soil contamination once the area got developed. Plus it enabled the city to have a monopoly on clean water supply.
Our water rates are going to double over the next 3 years. If the well has water and I drain my gutters into the two cisterns that we have and rig a pump to them, maybe I won't have the excessive sewer charge when watering my garden! You can't argue with a monopoly run by bureaucrats!

It rubs the lotion on its skin, or else it gets the hose again...sorry, it's almost three in the morning and that's the first thing that popped into my head looking at him standing in the well.
Desolation Dayton

I am hoping that when I start digging up the old rock pile/privy in my backyard (the well and cistern are still in operation, although we have city water) I will find some goodies. My parents' house had a dump in the backyard--easily accessible and a fun thing to do for a kid in love with Indiana Jones (not many people can say they have an archaeological dig in their own backyard) where we found all sorts of cool things, not only bottles.

So far at my house, I've found two pieces of broken crockery--one a large piece from a crock bowl and one a piece of porcelain. I'm hoping for more.