Years ago, about 13 in fact, I worked for an auction company for a little over a year. One of the auctioneers used to set up a booth at "Brimfield" every year and said that it was a "must see" kind of place. Many years passed and I saw an article in Better Homes and Gardens mentioning it and made a comment to Deborah that we ought to try to go some day. Well that day finally came. We loaded up the car and headed out to Massachusetts on Monday with the idea of arriving sometime on Tuesday. The trip is around 800 miles each way for us here in Ohio and I calculated that the minimum travel time was 12 hours. If you add in the "Elizabeth factor" and how many times she can say "I need to go pee-pee" and "Are we there yet?" in an hour then you are going to understand why the drive home took 15 hours.

We went with an open mind and nothing specific to look for.
If you are not familiar with antique/flea markets then Brimfield will be overwhelming for you. You cannot see the entire set up in one day and the way it works is a little strange. Basically there is a one mile stretch of road on Route 20 between the towns of Palmer and Sturbridge that is within the boundary of Brimfield. On each side of the road are privately owned fields that dealers pay at least $100 a day to set up a booth in. There are many fields and some open on different days and could be closed on the day you chose to be there. Upon opening they charge a $5 admission in some cases though the admission charge seemed to be waived after noon on opening day and on subsequent days. Some dealers move around so that they are in the new fields on opening day. I guess people are paying the admission fee to get the pick of the crop if they arrive early. Some of the fields are open at 6 AM others could open as late as noon. Due to much rain and what appeared to be a low turnout of buyers (due to gas prices, weather and vacations I guess) many dealers packed up around 2 PM on various days and left. Regardless, there were lots of dealers. Probably thousands. There are three shows a year here. May and September are better attended than July and Saturday is the busiest day.

We are familiar with what things are worth though we are not experts and were surprised that the prices at this show were actually reasonable. Some were better than reasonable and some were insanely unreasonable but in general prices were very fair.
We started our quest for things that catch our eye on Wednesday and vowed to pay no admission fees. We were distracted at the very first booth. 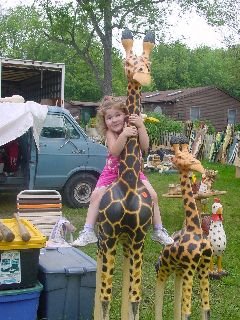 By the end of the day we had spent $10 and were wowed by one beaded hanging oil lamp for $400 that we didn't need but would look really good in the parlor because it had more bulk than the one we bought due to the fact that it had holders for 9 candles attached to it. I suspect it was from France or Belgium. We didn't buy it and it was still there when we left on Friday. Elizabeth was testing our patience all day and when she finally fell asleep it poured with rain and we couldn't walk around and look at stuff. 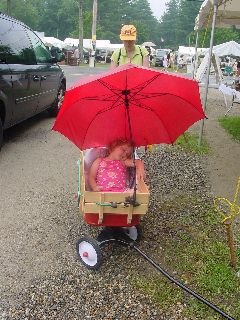 Thursday we got up early to arrive before 10 AM and we started off where we ended up on Wednesday. By lunch time it was raining again and we were stuck under the huge rug dealers tent where we ate our lunches. Elizabeth became quite infatuated with one of the rug dealers. While there we got to look at all kinds of Persian rugs and ended up buying this one. 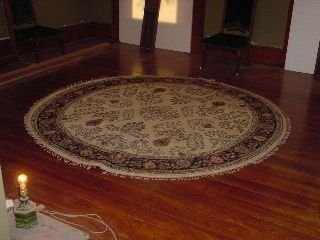 It wasn't cheap but it was a fair price for a hand made traditional rug. We got it for two reasons. The first being that we liked it and the second was that we don't see many round rugs and I have never seen one at an auction. This thing would certainly be the center focal point in whatever room it goes in. We got it with the main living room in mind but are more likely to use it in the "cottage" living room because the room is smaller.

Elizabeth did very well, she was showered with free stuff by various dealers and as this series of pictures shows, she made a lot of new friends! 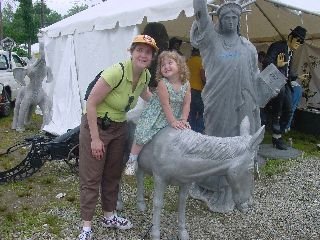 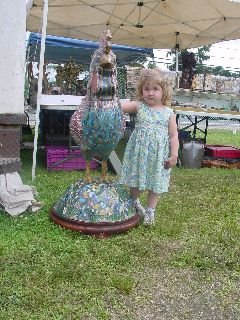 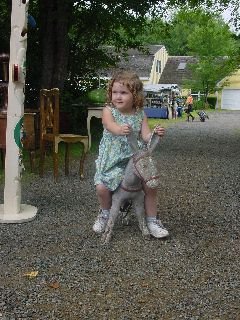 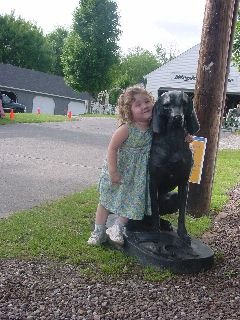 She even got a head start (by several years) for the "Daisy Duke" look-a-like contest! 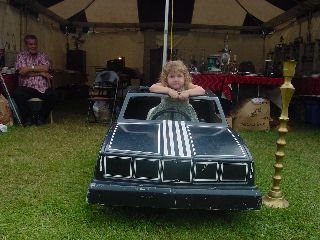 Friday we did very well. We stopped at a field several miles before the main Brimfield show where there were rows and rows of boxed lots and everything was $1 each!

We were there an hour and spent $24 on 24 pieces of stuff. The most useful item being a Griswold 6" damper for a woodstove which we need. Otherwise nothing worth photographing. We proceeded to the main show area where Deborah bought a "gozunda" for $20. In actuality it is a chamber pot. Called a gozunda because it goes under the bed. She has always wanted a toilet in the bedroom. This was the most affordable option! Once she told me she wanted something that would go from 0 to 150 in three seconds. When I bought her a bathroom scale I was sent to the doghouse for a week....

So when all was done on Friday we went to Applebee's in Sturbridge were we had arranged to meet The Fixer Uppers and Brockton bungalow bloggers. It's like meeting a local celebrity or someone you've read about in a tabloid! We spent at least two hours yapping about house related stuff while 3 year old Elizabeth and 5 year old Celia played waitress crawled under the tables and strolled arm in arm around the aisles before, during and after eating macaroni and cheese with ketchup. After the Brockton Bungalow Brood left we got to experience another Elizabeth moment (coniption fit). This time the police were not called out and I am now on the lookout for a late model broom that I can restore for her in time for her 16th birthday!

We are thinking about returning to Brimfield in September 2007. So, if you think you need an overdose of antiques and want an excuse to possibly meet other insane renovators, you have 14 months to prepare for the trip!
Posted by Gary at 2:01 AM

What a great experience- and to top it off with meeting other housebloggers- very fun! Kudos to Elizabeth for doing so well and for you guys enduring a 15 hour car trip with her. We're still working on surviving a half hour trip most days! The rug is gorgeous, btw.

I get such a chuckle out of Elizabeth's antics. I'm sure it's not funny to live through one, but it's danged funny to read.

Awesome rug - I love the circular ones. So eye-catching.

Elizabeth is such a ham ;)

We're thinking of going back in September too - maybe it's Woodstick time??

Your daughter is adorable. Every time I see her photograph this nursery rhyme pops into my head:

There was a little girl,
Who had a little curl,
Right in the middle of her forehead.
When she was good,
She was very good indeed,
But when she was bad she was horrid.

Bet Miss Elizabeth and my granddaughter could cook up some big trouble with a capital T!!