I Can't Name That Tune!

I thought that there would be 8 trash bags of pigeon poop infested rockwool in my attic. I was wrong. There were 15 bags. I wouldn't wish this job on anyone. Here is a picture taken in the attic; 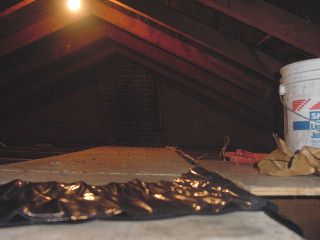 It is 16 feet X 16 feet in area and has about 3 feet of height in the center. There were 9 rows between joists and each one had around 3 inches of compacted rockwool insulation covered with either pigeon poop or raccoon poop. There is one just like it on the other side of the chimney but no access and minus the pigeon poop. There is a mummified squirrel over there though. I left it there when I had the roof off and was running an electrical line to the center of the room for a ceiling light.

In order to get this stuff out, I had to spend the better part of two days sitting on boards laid across joists and scoop it into a bucket with a cedar shingle. When the bucket was full, I had to dump it out into a garbage bag. At the edges I had to lay across the same boards. The rockwool was bad enough but beneath it was a layer of soot and plaster dust, the result of decades of coal powered industial processes at the turn of the last century. This stuff was black and very fine. It managed to get through the mask and I spent a good hour hacking the stuff up after working each day. Black goobers, yummy!

The rockwool has an R value of 3 per inch. So I have just removed the only insulation on this side of the house. I wonder if that soot layer had a higher R value? Maybe I shouldn't have vacuumed it up....

When you scoop out the rockwool and thus loosen it up, it takes up more volume and so fills the garbage bags more quickly. If you use a shop vac on the stuff it really expands because all those little glass fibers separate and clog up the filter. My arms have been itchy for days, too!

After all was done, I had to get those garbage bags down from the attic. So, now I have a room filled with garbage bags of rockwool insulation. 15 from this project and another 9 from when I did the kitchen four plus years ago! I think it is time to start moving them to the garbage can. Maybe I should wait until I do the other half of roof so I can say I have a room that is packed to the ceiling with insulation!

If I left the bags in the alley I wonder if the dope boys would try to smoke it. I could make a small fortune selling this stuff to frat boys as itching powder!

Wow, that's alot of poop. Pretty impressive, really. Maybe the neighbors could use it as fertilizer for their hydroponic "gardens"? You could probably make a killing. ;)

What is the insulation value of pidgeon poop?