Just to re-cap; back in 2001 when replacing the roof, I removed the plaster and lath ceiling to the balcony because it was held together with panelling and atmospheric pressure, was in very bad shape and was alot easier to remove from above with the roof removed and a good downward stomp! Eventually I wired the beams to accomodate two lights and a ceiling fan, though the fan will end up close to my head! Besides the odd raccoon getting up into the attic and crapping systematically along two of the ceiling beams (It was quite tidy really, little turds all in a row!) we had no real problems until last year.

So we had to invest in a pigeon-be-gone kit! Coke cans on a string weren't working. Pictures of owls in the window did nothing and my threats were idle because I couldn't fly. This Kit comes in three styles. It could have be the economy model (green drywall boards), the popular model (imitation beadboard plywood) or the delux model (actual beadboards). Since we plan to live here for a long, long time, we opted for the delux model (around $300 total material cost) since the cost of labor is affordable.... (ha,ha,ha joke here somewhere!)

Well, I finally did it! I got the ceiling finished on the balcony! It took the better part of two days but I even rewired the lighting to eliminate a splice box and put the lights in AND I didn't fall off in the process. Take a look at this! 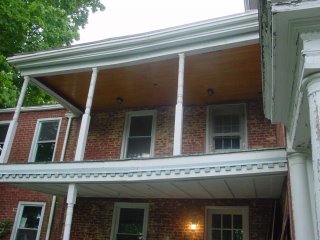 Just some edge trim work to do. I even shellacked the soffit vents so you wouldn't notice them. A couple of hammocks up there and you would think you were on a yacht!

It sure is hot in that attic! Especially with a rubber respirator mask on! I have four inches of pigeon and raccoon poop-infested glass wool insulation to remove next so I can put some clean fiberglass batts down. I'm estimating that it will fill at least 8 contractor garbage bags. Go ahead, name that tune!
I had 10 gallons of poop on the balcony floor to scoop up in case you were interested. Again, absolute proof that there is little I won't do..... at least I won't be getting any more sh*t from those pesky pigeons!
Posted by Gary at 9:51 PM

I love the beadboard. Using it on the Queen's porches was definately one of the better ideas we had.

I can't believe how much shit you hauled out of that house. Just thinking about it makes me want to gag. Thank God we don't have pigeons out in the country; too many things out here eat the flying-rats for them to live long.