We spent another Sunday at Woods Auction this weekend. Deborah spent lots of money this time. We got a bunch of stuff for the house so we can't complain. The prices were better than fair. We feel that we did very well with our acquisitions.
First off, Deborah always wanted an Empire chest of drawers. We got this monster for $160.00. 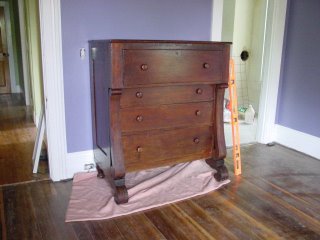 The 4 foot level shows the scale. This thing is huge! It must weigh near 200 lbs without the drawers.We didn't realize how big it was until we put it in the bedroom. A neighbor helped me carry it up the stairs and we almost lost it near the top. We put a good ding in my finished door frame but considering that it almost went over the banister rail, that is an acceptable price to pay.

I took Elizabeth outside because she wanted to run around. After some 10 sprints across a field to a tree we went back in and found that Deborah had bought 5 Persian rugs. The largest one was 11' X 9' and cost the most at $275.00. These were wool/cotton rugs made in Iran. Worth alot more than what we were paying. Here is a picture with the 3 smallest ones laid out in the bedroom. The largest 2 are rolled up in the living room and covered with plastic until I am done with sanding the floor. 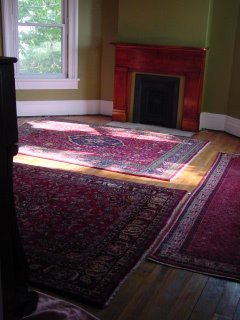 I actually spent $40.00 and bought this 4 pc. Eastlake parlor set that needs to be re-upholstered. That is a good rainy day project for the future. 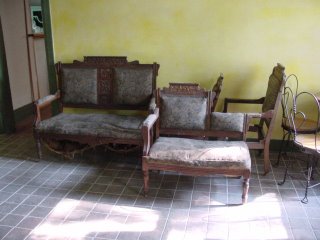 We couldn't keep Elizabeth still until we bought her this metal pig (picture taken later at home). 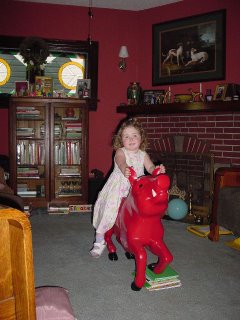 After that she sat quietly on it for the rest of the auction with a huge smile on her face. I have since mounted it on a plywood board with a piece of galvanised pipe like a carousel animal. I would like to find a spring to mount it on for her. Probably the best $45.00 we spent!

There were a few other things we got but by far the best thing was this Victorian hanging library lamp which will go in the parlor. 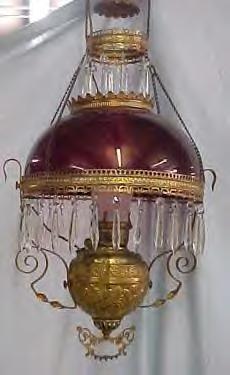 It is all original but has been wired for electric. Which is fine by me. After I got it home, cleaned all the dust off of it and oiled the pull down chain mechanism I saw the B & H and what appears to be an 1860s patent date on the mechanism. (I will have to check that out some day.) This would indicate that it is a Bradley and Hubbard lamp. That makes it more valuable because it authenticates it's age. A reproduction lamp like this will cost some $400.00. We got it for less! This is probably a $1000.00 lamp. It won't be installed for a while though. We have to get the walls and ceiling painted first. We have been looking at these for 5 years and quite expected to pay at least $700 for one if we wanted it bad enough. Never thought we would get a Bradley and Hubbard though! We now have most of the lighting purchased for the Crackhouse. Most of it was bought at flea markets and auctions.
Posted by Gary at 1:15 AM

You did have a great day! What treasures! The Eastlake parlour set for $40 is incredible and the pig is great, too.

Love that chest of drawers! And of course, the pig. What a bargain.

WOW! I need to go shopping with YOU guys. Great finds!