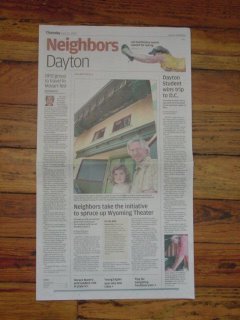 The photograph is larger than the article! Must be a slow news day here in the "Gem City". Here is how it reads;

Neighbors take the initiative to spruce up Wyoming Theater
The Walnut Hills Association grew tired of looking at the rundown building and decided to paint it.By Helen Bebbington
Contributing Writer
DAYTON In the early 1900s, the old Wyoming Theater, which faces the intersection of Wyoming Street and Gunckel Avenue, showed silent movies. The arrival of the "talkies" ended its use as a theater. It was a restaurant for a while, and after that, a bar.
However, for about the last 20 years, it's been vacant and has become dilapidated.
Neighbors who live in Walnut Hills appreciated the architecture, but not its neglected appearance. So, armed with paint, brushes and the building owner's permission, neighbors have spent the last two months giving the old theater a fresh, colorful look.
"The only way we're going to get anything done is to do it ourselves," said Gary Leitzell, president of Walnut Hills Association.
Leitzell approached the owner more than a year ago. When nothing happened, Leitzell decided that, rather than complain to the city of Dayton, he would round up a dozen or so people and use $260 of association money to buy paint and equipment.
"It's a matter of community relations, and a sense of pride," said Leitzell. "It wasn't going to get done. This could be done throughout the city. (People need to) take the initiative."
"It looks great; they did a fabulous job," said building owner George *********** of ***** ***********.
***********, has owned the building for three years and is planning on fixing the roof and flooring. He has no definite plans but envisions using the building as offices, or a photography studio. He plans to compensate the Walnut Hills Association, which is a nonprofit group.
"We're tired of looking at everything in Dayton that is dilapidated," said Walnut Hills neighbor David Sparks. "All day long when we worked on it, people came up and thanked us. It just feels really, really good."
The picture is me of course, with your favorite little "munchkin". When she saw it she said "That's me with my daddy at the building!"

There is a reference to this blog so I am seeing lots of local traffic today! Guess I can run but I can't hide.... not that anyone is looking for me.

UPDATE. November 6, 2012. I have been asked to remove the name of the building owner from this blog. He has a problem with it being Googled and associated with a blog named "This Old Crack House". The building was demolished by the city this year. It would appear that the owner who does not wish to be named who planned to fix the roof and floor let the roof and rear wall collapse and the tax payer foot the bill.
Posted by Gary at 12:22 PM

Congrats on making the front page, that's great. Now you'll be a local celebrity for a few days!